I have written before (here, for instance) on the blog about prisons and torture. 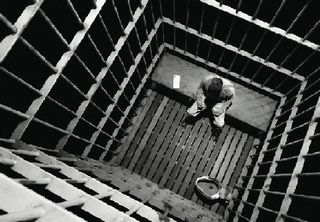 And I think it's well worth the while of people of faith to ask whether the government and the prison systems they support with their tax dollars engage in torture, a practice (despite the admission of former President George W. Bush that he approved its use) that goes against almost every fiber of religion.

That's why I've highlighted the work of the National Religious Campaign Against Torture.

Today I want to bring the question of the use of torture closer to home and share with you this piece, which suggests that the super-max security prisons in the U.S. regularly use torture, especially in the form of long solitary confinements.

America seems to have gone prison crazy. For more -- and more recent -- details from the Department of Justice, click here.

I guess that somehow we imagine it will make all of us safer if we lock up anyone who has violated any part of the law. It's a foolish approach that in some ways results in more clever criminals, who sometimes learn in prison how to commit crimes better.

I can't vouch for everything said in the super-max prison piece to which I've linked you. But there's enough there to make all of us raise questions about this.

And if we're not doing at least that much, we may be complicit in what is going on behind bars.

What have religious leaders been saying and doing about the protests in Wisconsin (now spreading elsewhere)? Click here for a pretty good round-up that at least partly answers that question. Some people get upset when faith communities issue statements or take actions relative to political matters or some time of hot current event. But I don't see how they can be faithful to their values by remaining silent when something needs to be said.

After Shock: Searching for Honest Faith When Your World is Shaken, by Kent Annan. I like this book a lot, mostly because it doesn't try to let God off the hook. The author has worked in Haiti for a number of years and, in this volume, describes the devastation of the country in the murderous January 2010 earthquake and the way in which such a disaster tested his faith -- and can test ours. Early in the book he gets it right: "People who claimed definitive answers on faith, doubt and suffering can't be trusted." In response to what happened to Haiti and several other crises, Annan says, ". . .I've been in a cold war with God, setting up a demilitarized zone between God and me. . ." The stories of Haiti are compelling, but even more compelling is the way Annan seeks to ask the hard questions of faith and not accept simple answers. Indeed, the questions of theodicy -- that is, the old questions about why there's evil in the world if God is good -- are the open wound of religion. And, ultimately, all theodicies that seek to answer that question fail. Annan, though a committed Christian, acknowledges that sometimes these hard questions turn him into an agnostic. But through it all he's learned that it's only when faith is tested in this way that one can truly own it and, in the end, rely on it when one's world comes crashing down.