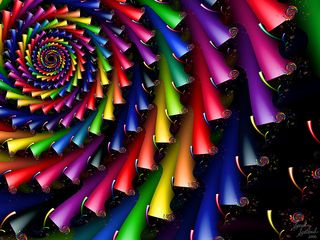 I wasn’t suggesting that our blood-nuclear families are unimportant. Not at all. Rather, I was trying to get people to see that extended families created by grace and inclusion broaden our vision of family in healthy and important ways.

In recent weeks I have experienced two examples of just that lesson. The first was at the bar-mitzvah of the son of a friend. I wrote about that here. The son was adopted quite early in his life and now is fully integrated into his new family.

The second was at the funeral at a Lutheran church for a 40-year-old man, Robert, who became the son of a gay couple I’ve known for a long time. The couple adopted him when he was not quite 16 years old, and they say they believe it was the first known adoption to an openly gay couple granted by a court in the U.S. (Robert was the subject of this "Tribute" feature on the obituary pages of The Kansas City Star yesterday.)

The boy had grown up under terribly difficult circumstances. His parents died when he was 10, and he and his two sisters went to live with maternal grandparents in Florida. A few years later he was placed in the custody of a paternal uncle and his wife in the Kansas City area. But when the teen-ager came out of the closet and identified himself as a gay young man, his family kicked him out.

That’s when my friends took him in and eventually adopted him. Indeed, ultimately the young man changed his last name to a hyphenated name that connects the last names of both of his fathers, one of whom serves as parish associate at the Lutheran church where the service was held.

The pastor who conducted the funeral service told my friends that when they took the boy in, they saved his life. And a sanctuary full of people was a testimony to the fact that both the young man and his fathers loved and were loved by a larger community.

There is a myth about what a “traditional” family looks like, especially among Christians who identify themselves as conservative or fundamentalist. But I can’t see that the biblical witness provides much comfort to those holding that view. Indeed, Mosaic law protected polygamy and the Bible is full of stories of families who were anything but “traditional.”

That’s part of the point, in fact, when, in Matthew 12, Jesus, surrounded by friends and followers, is told that his mother and brothers and sisters were outside asking for him.

“Who is my mother, and who are my brothers?” he asks. Then, pointing toward his disciples, he says, “Here are my mother and my brothers.”

As I say, it’s a way of expanding our vision of family. And having seen the proof of how it can work in recent weeks, I think that broader vision is the one we should keep in mind as we celebrate what family can mean to us.

BLEST BE THE TITHE THAT BINDS

The recession that has slammed many people and many businesses has not left churches unaffected. This NPR report says that banks or mortgage lenders foreclosed on about 100 churches in the U.S. last year. Wonder how churches would be weathering this storm if all members really tithed. Hmmm. Religion scholar Martin E. Marty, in his periodic "Sightings" column published yesterday, also took note of church foreclosures and included a link to a Wall Street Journal piece on the subject. Also: This morning The Kansas City Star reported that an area megachurch faces the possibility of foreclosure.