The other day here on the blog I wrote about Mark Twain and mentioned the first volume of his newly published (100 years after his death) autobiography. 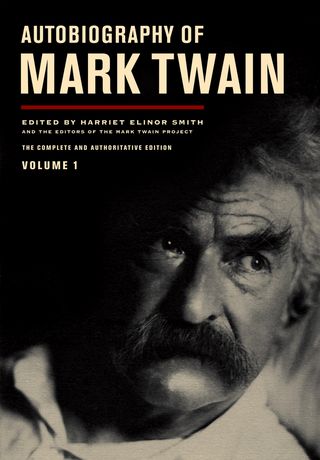 I'm not yet halfway through it, but wanted to share with you some of Twain's thoughts about religion I've found intriguing.

Well, I say it's Twain's thinking about religion, but even when he seems to be writing about that or about God what he's really writing about is flawed humanity, which appalls him, horrifies him, dismays him, sometimes even shocks him -- until he recognizes himself as part of the problem.

Most of us know that Twain seemed to acquire a darker, more sober attitude toward life as he aged, and he began to abandon the lessons taught by his Presbyterian upbringing -- a rather stricter, more black-and-white theology than one is likely to find in most Presbyterian churches today. I don't yet have anything like an exhaustive picture of Twain's religious thinking to offer, but I have found a couple items in the autobiography worth passing along.

In the first, Twain is writing about how humanity fails to understand the ways in which is "a beast and a brute." He writes:

The Westminster Catechism (written in 1647), one of the statements of faith contained in the Book of Confessions of the Presbyterian Church (USA), declares that humans are "wholly defiled in all the faculties and parts of soul and body." What's called the Doctrine of the Total Depravity of Humankind isn't quite as bad as it sounds but it nonetheless insists that the image of God within humanity is stained and that humans themselves are incapable of saving themselves from this wretched condition and thus need a savior.

So Twain has some fun with the catechism and its views on humanity, which essentially he shares, despite his joke that the polecat is better for having not created such a document.

Some 50 pages later, Twain is writing about all the changes that have occurred in the 19th century and how these changes have resulted in

"a very credible creation indeed, taking all things into account; since man, quite unassisted, did it all out of his own head. I jump to this conclusion because I think that if Providence had been minded to help him, it would have occurred to Providence to do this some hundred thousand centuries earlier. We are accustomed to seeing the hand of Providence in everything. Accustomed because if we missed it, or thought we missed it, we had discretion enough not to let on. We are a tactful race. We have been prompt to give Providence the credit for this fine and showly new civilization and we have been quite intemperate in our praise of this great benefaction; we have not been able to keep still over this spendid five-minute attention, we can only keep still about all the ages of neglect which preceded it and which it makes it so conspicuous."

He then goes on to marvel at how people thank God for saving them from calamities but fail to blame God for creating those very calamities.

Well, it's a simplistic theology that gets all tripped up in the age-old question of theodicy -- why there is evil in God's good world. Theodicy is the open wound of religion and all explanations ultimately fail, so it's not surprising that even minds as splendid and acrobatic as Twain's would crash on theodicy's rough shores. But that doesn't mean we need to make Twain our teacher in this. There are better ones. Just not as clever and funny.

ADJUSTING TO ISLAM IN BRITAIN

Britain -- indeed, all of Europe -- has been seeking to find a harmonious way to integrate Muslim immigrants and converts into its culture. And as this intriguing piece suggests, the Brits have been doing a better job of it than some other European countries. Indeed, the most popular name now for baby boys in England is Muhammad (in any of its various spellings). It's the ability of a culture to re-examine itself and adjust in light of new realities that will play the biggest part in its long-term survival. And this raises the question of how you think America is doing recognizing and adjusting to our changing religious landscape?