As our nation moves toward the Martin Luther King Jr. holiday on Monday, we have an opportunity to remember three things. 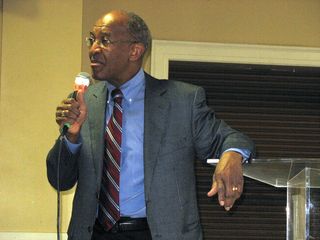 1. The civil rights movement found its moral compass in religious communities, especially in the black church but also in other locations, including the Jewish community.

2. The nation has made progress in bringing civil rights to all citizens. This is denied by no one but the most willfully ignorant. Why, the entire modern civil rights movement has played out in my own lifetime, which began with a racially segregated U.S. military, the commander-in-chief of which today is an African-American. Heck, the first lunch counter sit-ins occurred when I was in high school.

3. The progress we've made as a nation has been by fits and starts and, in the end, has left much unaccomplished. Each of us, no matter our ethnic origin, no doubt has a list of what has been left undone and needs to be tackled still, but I was intrigued the other evening to listen to the Rev. James A. Forbes (pictured here), retired senior pastor of the Riverside Church in New York City and president and founder of the Healing of the Nations Foundation of New York. He said he talked recently -- in an imaginative sort of way -- with King and asked what remains to be done to created what King used to call the beloved community. The list was long but began with the idea that the issue of race would be faced honestly. Other items included an emphasis on spiritual versus material things, as well as having elections that cannot be purchased.

Well, here, is a recording of his talk. It will take you a little over three minutes to listen to King's-via-Forbes' list of what remains undone. Just fast-forward to minute 21, second 55 on this digital tape and play (my digital tape editor isn't working or I'd clip out the section for you. Sorry.) Listen until 25:11: Download James-Forbes

What's on your list of what must be done to make America a nation in which all enjoy equality under the law as well as respect due to all human beings?

DON'T BACK DOWN, POPE

The government of Egypt appears to have thrown a fit over perfectly reasonable comments from Pope Benedict XVI on the need for that government (and other governments) to protect vulnerable Christians from attack.Look, Cairo, people are dying in needless violence, and you have a job to try to do. Just do it and quit making yourself look foolish by acting impetuously.

P.S.: Wonderful news. My friend and fellow Ghost Ranch instructor J. Philip Newell, author and expert on Celtic spirituality, will be giving three free-to-the-public lectures next week at Nazarene Theological Seminary in Kansas City, the evenings of Jan. 18 and 19, and the morning of Jan. 20. For details and a pdf file to pass around to others, click on this link: Download Heinmiller Lectures January 2011 JP Newell

Dilemma: A Priest's Struggle with Faith and Love, by Father Albert Cutié. Perhaps you've read some news stories about this just released book. This one, for instance, ran in The Kansas City Star's Faith section. And perhaps you are interested because the author, a former Catholic priest and now a married Episcopal priest, offers profound criticism of the Catholic Church's treatment of him and of the church's policy requiring celibacy by priests. Well, all of that is true and it's all in the book, but be aware that this is a remarkablly self-centered book that, in the end, does not really confront in a helpful, studious way the issue of priestly celibacy. Rather, this is Cutié's defense of his decision to violate his own pledge of celibacy and of the non-pastoral way he says the Catholic Church handled him. There is a lot of pain and angst in this book, along with the compelling story of a man falling into forbidden love. So it's an engaging read, though the writing is pretty pedestrian. But this is not the place to come to find a deliberate, balanced exploration of celibacy. Indeed, Cutié often gets in the way of his own story because of his righteous indignation and his defensiveness. And that's too bad. One wants to feel sympathy for what he's gone through -- but even that gets difficult as it's clear that he thinks nearly all of this is the fault of someone else. No doubt the Catholic Church is uncomfortable over the revelations in this book about how this or that bishop dealt with this case. And maybe, in the end, that will be helpful to others. But Cutié himself does not come off as a very sympathetic character here. A little Benedictine humility might have helped.