Over the years I have written several times here and elsewhere about how the Christian doctrine of the resurrection of the body differs substantially from the old Greek idea of the immortal soul. Click here and here for examples. 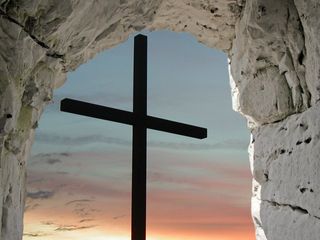 As the late theologian Shirley C. Guthrie writes in his book Christian Doctrine, "Christians reject the doctrine of the immortality of the soul because of the unbiblical split it makes between body and soul, physical-earthly and spiritual-heavenly life. . . The Bible does not teach that the body is only a worthless or evil prison which degrades our true self. . . (T)he biblical hope is not for the soul's escape from the bodily-physical into some purely spiritual realm. Our hope is for the renewal of our total human existence."

The other day I was reading a borrowed copy of a lovely book by a funeral director (and poet), The Undertaking: Life Studies from the Dismal Trade, by Thomas Lynch, when I ran across a wonderful affirmation of what I've been trying to tell people about the difference between these two concepts.

Lynch begins by talking about the theory that our bodies are "just a shell" and that our true selves are independent of those shells:

"You hear a lot of it from young clergy, old family friends, well-intentioned in-laws -- folks who are unsettled by the fresh grief of others. You hear it when you bring a mother and father in for the first sight of their dead daughter, killed in a car wreck or left out to rot by some mannish violence. It is proffered as comfort in the teeth of what is a comfortless situation, consolation to the inconsolable. . .

"So to sugggest in the early going of grief that the dead body is 'just' anything rings as tinny in its attempt to minimalize as it would if we were to say it was 'just' a bad hair day when the girl went bald from her chemotherapy. Or that our hope for heaven on her behalf was based on the belief that Christ raised 'just' a body from the dead. What if, rather than crucifixion, he'd opted for suffering low self-esteem for the remission of sins? What if, rather than 'just a shell' he'd raised his personality, say, or The Idea of Himself? Do you think they'd have changed the calendar for that? Done the Crusades? Burned witches? Easter was a body and blood thing, no symbols, no euphemisms, no half measures."

Nicely put. It's all a scandal, of course, this Christian doctrine. It's all foolishness in the eyes of human wisdom. But there it is. That's the core of Christianity and always has been. And in some ways it's the outrageous nature of it all that I find so attractive.

THE TUCSON KILLINGS AND FAITH

As the investigations continue into the Tucson massacre and into the young man arrested for the crimes, the question has come up as to whether religion played any role in his life. This piece quotes people who knew him on the subject, but at the moment, at least, it appears that there's no conclusive answer and that what seems to be a tormented mind was as confused about religion as about everything else. I'm hoping we'll learn more, however. And I'm hoping faith communities all over the country will engage in honest discussion about how to recognize people capable of such acts and what to do about them once they are recognized.