The Adventures of Huckleberry Finn by Mark Twain is the greatest novel ever written by an American. And the the slave Jim in the book is one of the most moral, inspiring characters in all of literature. If everyone in the world were a Jim we would live in peace and the reign of God would be manifest. 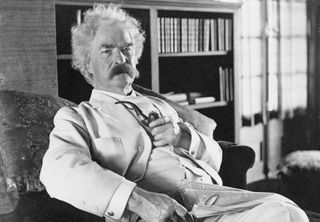 That's one reason I try to re-read Finn every few years. With each reading I discover some wonderful new aspect or thought or something that I had missed before.

And it's why I'm now plowing through my Christmas gift version of the huge newly issued first volume of the just-published Autobiography of Mark Twain, produced on the 100th anniversary of his death. Although Twain's writing could at times be formulaic, he clearly was a genius and would be considered so by any thinking person even if Finn were the only thing he'd ever written.

Which brings me to news of an astonishing affront to Twain that constitutes a ridiculous cave-in to the foolish notion that Americans have such tender sensibilities that they are unable to read documents from the past without needing to fix them up with modern language so as not to offend anyone.

As this ABC News piece reports, "A new version of Huckleberry Finn is being published -- one that swaps the 'N-word,' which occurs 219 times throughout, for 'slave.' The NewSouth book also omits the word 'Injun.'"

Look, as a white man, I am well aware of the painful wound the word nigger can produce, especially when it comes from the mouth of a white bigot. I'm also aware of the genocidal ravage white people perpetrated on Native Americans.

But those things have so precious little to do with the use of nigger and Injun in Finn that it's an outrage even to raise the possibility of changing Twain's masterpiece to avoid the words. Indeed, even if Twain were using nigger as a deliberate affront to African-Americans, which he's not, that still wouldn't justify removing it from the historical document that is the Finn manuscript.

But not only is Twain not using the word that way, he's using it both to reflect the reality of the times and also to set up a contrast between the pejorative, dismissive word and this black moral giant, Jim, whose very life is a reproach to all who would use the N-word and to all who would promote -- or remain silent in the face of -- racial prejudice.

Indeed, let's hear from the master himself on this issue, from the just-released Twain autobiography, in which Twain writes about his boyhood in Hannibal, Mo.: "All the negroes were friends of ours, and with those of our own age we were in effect comrades. I say in effect, using the phrase as a modification. We were comrades, and yet not comrades; color and condition interposed a subtle line which both parties were conscious of, and which rendered complete fusion impossible. We had a faithful and affectionate good friend, ally and adviser in 'Uncle Dan'l,' a middle-aged slave whose head was the best one in the negro-quarter, whose sympathies were wide and warm, and whose heart was honest and simple and knew no guile. He has served me well, these many, many years. I have not seen him for more than half a century, and yet spiritually I have had his welcome company a good part of that time, and have staged him in books under his own name and as 'Jim,' and carted him all around -- to Hannibal, down the Mississippi on a raft, and even across the Desert of Sahara in a balloon -- and he has endured it all with the patience and friendliess and loyalty which were his birthright. It was on the farm (Twain's uncle's farm near Hannibal) that I got my strong liking for his race and my appreciation of certain of its fine qualities. This feeling and this estimate have stood the test of many years and more and have suffered no impairment. The black face is as welcome to me now as it was then."

I rest my case. Nothing about Twin's use of "nigger" smacks of racism. Indeed, it is used to combat that very evil.

I said here the other day that bigotry against gays and lesbians finds most of its roots in a misreading of the Bible. And I mentioned then that in the past (indeed, in Twain's life time) many people in many churches used the Bible as a justification for slavery.

That's the mindset that Twain's book Finn stands solidly against. You remove the N-word from it and it is drained of much of its power to confront faith-based hatred.

LETTING HAITI FEND FOR ITSELF

A year after the earthquake in Haiti, the people there are feeling abandoned, says a Catholic archbishop there. Well, no wonder. The Haitians have a little bauxite, a little copper but no oil or many other natural resources the rest of the world wants to pillage, so the rest of the world doesn't much care. Isn't that how it works?