Several times in the last few years I have written about the use of torture and of the efforts to stand against it, especially by the National Religious Campaign Against Torture (NRCAT). 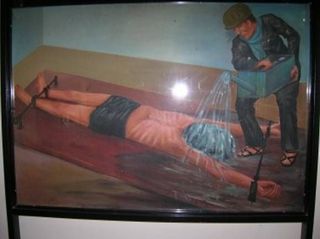 It seems to be to a difficult battle to win, especially when former President George W. Bush can and did -- without consequence -- boast that he personally approved waterboarding (depicted here).

This recent piece in Slate describes how the heck we ever got to this sorry state of affairs. And it expresses the disappointment I feel because President Barack Obama has not been more forceful in standing against torture by insisting that legal action be pursued against those guilty of it.

I find our willingness to accept torture as a legitimate tool more evidence that we've lost our moral compass. In a country as supposedly religious as is the United States, this is even more distressing because it shows that many people of faith either don't understand what their religions are teaching them or they are rejecting those teachings.

My guess is that the leaders of many faith communities are refusing to tackle this matter head on and, thus, members of their congregations hardly ever think about torture and why it is wrong.

I hope you'll look around the NRCAT Web site to which I've linked you above and see if there are ways you or your faith community might get involved in opposing the use of torture.

Oh, and The New York Times today published this editorial commending Britain's approach to torture and criticizing the U.S. approach.

TOWARD A MIDDLE EAST PEACE?

All of us know that religion plays a central role in the Middle East, particularly in the Israeli-Palestinian conflict. Although it is about so much more than faith, the roots of tension in the Holy Land go back to matters of religion. I think Secretary of State Hillary Clinton gets that and, as New York Times columnist Roger Cohen indicates, she now gets a lot more. Indeed, she's now in a position to work out some kind of settlement there, though the hurdles still are high. But I think Cohen is right to be hopeful this time.

Spiritual Envy: An Agnostic's Quest, by Michael Krasny. Would that all agnostics, atheists, freethinkers, secular humans and the like be as reasonable and open as Michael Krasny, who hosts a popular NPR local radio talk show in the Bay Area. This book is Krasny's attempt to describe how a devout Jewish boy (Krasny himself) eventually lost his belief in a personal God and wound up seeking to live without clear spiritual answers. It's an engaging story of someone wrestling with the eternal questions, but doing so in a way that does not criticize others who have come to different conclusions. Indeed, the envy part of this title represents Krasny's feeling that he wishes he could have a comforting sort of faith in God. An especially interesting part of this book is Krasny's description of how the term agnosticism began and what it might mean today.

P.S.: The Presidential Commission for the Study of Bioethical Issues has set up this blog space to report about various matters, starting with hearings this week (they started yesterday) in Atlanta about synthetic biology. These are important matters and this is a place to start to stay up with what's happening.

ANOTHER P.S.: My latest National Catholic Reporter column, "To understand redemption, we must talk about death," now is online. To read it, click here.