Several years ago, when I was still a member of the editorial board of The Kansas City Star, leaders of what was then called the Reorganized Church of Latter-day Saints (RLDS) came to talk to our board about the church's decision to rename itself the Community of Christ (CofC), an international church based in Independence, Mo., just east of Kansas City. 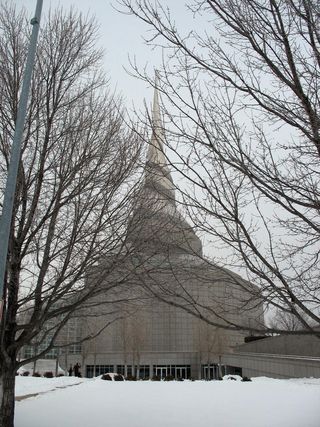 It was a good an interesting discussion. And it was clear to me that the CofC was taking intentional steps toward being more in the mainstream of Christianity, which meant moving further away from the Church of Jesus Christ of Latter-day Saints (LDS, or the Mormons), from which it broke away in the 19th Century.

But despite this move, I asked W. Grant McMurray, who then was the CofC president, whether it was nonetheless still true that the CofC would continue to hold the Book of Mormon as holy scripture on a par with the Bible.

Yes, he said. The CofC won't move away from that.

Which I took to mean that the CofC would not be considered within the mainstream of tradtional Christianity, which holds that the Bible is a witness without parallel to God and to God's saving grace through Jesus Christ. (There is, by the way, some internal disagreement among Community of Christ members over whether the Book of Mormon and the Bible should be viewed as equal in stature to scripture.)

And yet the CofC is continuing to move toward a closer relationship with that traditional stream of Christianity.

The latest evidence is that the National Council of Churches just approved the CofC as a member. (For the NCC report on this, click here and scroll down a bit.) In addition, the CofC has adopted a new policy that says people baptized in other Christian traditions may now join the CofC without needing to be rebaptized.

As Richard Brown, author of the excellent new book What Was Paul Thinking (which I reviewed in this July blog posting) says on his blog, "Clearly there are those who view this moment in the church’s long history as a leap into religious maturity while others see it as damning proof of apostasy."

Not only that, but looking at this from a non-CofC mainstream Christian perspective, no doubt there are those who view this as an important and generous opening of the Christian fellowship while others see it as damning proof of apostasy on the part of the National Council of Churches for allowing the CofC into membership.

I have no way of knowing how all of this will play out over the next few years or even decades or centuries. But it would not surprise me to discover that years from now (maybe 50, maybe 100, maybe more), the CofC will renounce its policy of holding the Book of Mormon and the Bible on level footing and the CofC will, in fact, become another branch of traditional Christianity in much the same way that the Worldwide Church of God (now the Restored Church of God), founded by Herbert W. Armstrong, eventually distanced itself from Armstrong's non-traditional theology and became a mainstream evangelical denomination. It's now known as Grace Communion International.

I could be dead wrong about this, but that's the way I see things trending. And I'd be curious to hear from CofC members about this. You can e-mail me at wtammeus@kc.rr.com to tell me you think I'm right or I'm nuts. Or perhaps somewhere in between.

(The photo here today is one I took of the CofC temple in Independence when I spoke to a group there this past winter.)

An energy company based in Texas is using the Bible as a guide to find oil in the Holy Land. The technical term for such a reading is, I think, oiliteralism.