On this Veterans Day, I want to invite you to think about pacifism. 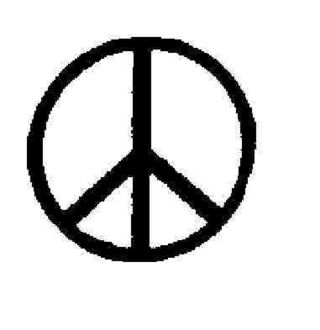 I am not a pacifist if that means agreeing that one cannot use force even in self-defense. I believe there are times when we are confronted by violent evil and must defend ourselves by the use of force. Not many times, but some. (Similarly, if I were king I would severely limit -- but not make illegal -- abortion, on the theory that there are times when abortion is the least evil of a series of evil choices.)

So on this Veterans Day I want to give thanks to all those men and women in uniform who have been willing to risk their lives to defend the lives of the rest of us. At the same time, I think we all would do well to acknowledge that sometimes our political leaders send our military off to stupid and ill-conceived wars. The war in Iraq I now count among them.

I've mentioned Duke theologian Stanley Hauerwas here a few times this year, partly because I heard him speak in the Kansas City area this past May and partly because I've read his new memoir, Hannah's Child.

Hauerwas identifies himself as a pacifist. He tells how he has a sign on his office door (I think it's from the Mennonite church) that offers a "modest proposal" that Christians should quit killing other Christians.

Well, that's all clever and wise and thought-provoking. But sometimes it's Christians from whom other Christians must defend themselves. To imagine that Christians are incapable of aggressive evil violence is to think foolishly, dangerously and even naively.

But I wanted Hauerwas in his memoir to explain clearly why he's chosen pacifism. He doesn't. And I contend that it's not painfully obvious why those of us who are followers of the Prince of Peace should automatically adopt pacifism as our position.

I'd enjoy hearing from any of you who is a pacifist why that makes sense. E-mail me at wtammeus@kc.rr.com.

And for the rest of us? As you thank a veteran, try to be the peace today.

I thought President Obama's speech in Indonesia this week was another important step in creating better relations between Islam and the United States. It was a follow-up to his earlier speech in Cairo addressed to Muslims, and was a way for a non-Muslim to encourage Muslims to reject the radical violence represented by the Osama bin Ladens of the world. Yes, I've given you a link to the whole speech, but here's the latter part of it that I'd really like you to read and ponder:

Now, religion is the final topic that I want to address today, and -- like democracy and development -- it is fundamental to the Indonesian story.

Like the other Asian nations that I’m visiting on this trip, Indonesia is steeped in spirituality -- a place where people worship God in many different ways.  Along with this rich diversity, it is also home to the world’s largest Muslim population -- a truth I came to know as a boy when I heard the call to prayer across Jakarta.

Just as individuals are not defined solely by their faith, Indonesia is defined by more than its Muslim population.  But we also know that relations between the United States and Muslim communities have frayed over many years.  As President, I have made it a priority to begin to repair these relations.  (Applause.)  As part of that effort, I went to Cairo last June, and I called for a new beginning between the United States and Muslims around the world -- one that creates a path for us to move beyond our differences.

I said then, and I will repeat now, that no single speech can eradicate years of mistrust.  But I believed then, and I believe today, that we do have a choice.  We can choose to be defined by our differences, and give in to a future of suspicion and mistrust.  Or we can choose to do the hard work of forging common ground, and commit ourselves to the steady pursuit of progress.  And I can promise you -- no matter what setbacks may come, the United States is committed to human progress.  That is who we are.  That is what we’ve done.  And that is what we will do.  (Applause.)

Now, we know well the issues that have caused tensions for many years -- and these are issues that I addressed in Cairo.  In the 17 months that have passed since that speech, we have made some progress, but we have much more work to do.

Innocent civilians in America, in Indonesia and across the world are still targeted by violent extremism.  I made clear that America is not, and never will be, at war with Islam.  Instead, all of us must work together to defeat al Qaeda and its affiliates, who have no claim to be leaders of any religion –-- certainly not a great, world religion like Islam.  But those who want to build must not cede ground to terrorists who seek to destroy.  And this is not a task for America alone.  Indeed, here in Indonesia, you’ve made progress in rooting out extremists and combating such violence.

In Afghanistan, we continue to work with a coalition of nations to build the capacity of the Afghan government to secure its future.  Our shared interest is in building peace in a war-torn land -- a peace that provides no safe haven for violent extremists, and that provide hope for the Afghan people.

Meanwhile, we’ve made progress on one of our core commitments -- our effort to end the war in Iraq.  Nearly 100,000 American troops have now left Iraq under my presidency.  (Applause.)  Iraqis have taken full responsibility for their security.  And we will continue to support Iraq as it forms an inclusive government, and we will bring all of our troops home.

In the Middle East, we have faced false starts and setbacks, but we’ve been persistent in our pursuit of peace.  Israelis and Palestinians restarted direct talks, but enormous obstacles remain.  There should be no illusion that peace and security will come easy.  But let there be no doubt:  America will spare no effort in working for the outcome that is just, and that is in the interests of all the parties involved -- two states, Israel and Palestine, living side by side in peace and security.  That is our goal.  (Applause.)

The stakes are high in resolving all of these issues.  For our world has grown smaller, and while those forces that connect us have unleashed opportunity and great wealth, they also empower those who seek to derail progress.  One bomb in a marketplace can obliterate the bustle of daily commerce.  One whispered rumor can obscure the truth and set off violence between communities that once lived together in peace.  In an age of rapid change and colliding cultures, what we share as human beings can sometimes be lost.

But I believe that the history of both America and Indonesia should give us hope.  It is a story written into our national mottos.  In the United States, our motto is E pluribus unum -- out of many, one.  Bhinneka Tunggal Ika -- unity in diversity.  (Applause.)  We are two nations, which have traveled different paths.  Yet our nations show that hundreds of millions who hold different beliefs can be united in freedom under one flag.  And we are now building on that shared humanity -- through young people who will study in each other’s schools; through the entrepreneurs forging ties that can lead to greater prosperity; and through our embrace of fundamental democratic values and human aspirations.

Before I came here, I visited Istiqlal mosque -- a place of worship that was still under construction when I lived in Jakarta.  And I admired its soaring minaret and its imposing dome and welcoming space.  But its name and history also speak to what makes Indonesia great.  Istiqlal means independence, and its construction was in part a testament to the nation’s struggle for freedom.  Moreover, this house of worship for many thousands of Muslims was designed by a Christian architect.  (Applause.)

Such is Indonesia’s spirit.  Such is the message of Indonesia’s inclusive philosophy, Pancasila.  (Applause.)  Across an archipelago that contains some of God’s most beautiful creations, islands rising above an ocean named for peace, people choose to worship God as they please.  Islam flourishes, but so do other faiths.  Development is strengthened by an emerging democracy.  Ancient traditions endure, even as a rising power is on the move.

That is not to say that Indonesia is without imperfections.  No country is.  But here we can find the ability to bridge divides of race and region and religion -- by the ability to see yourself in other people.  As a child of a different race who came here from a distant country, I found this spirit in the greeting that I received upon moving here:  Selamat Datang.  As a Christian visiting a mosque on this visit, I found it in the words of a leader who was asked about my visit and said, “Muslims are also allowed in churches.  We are all God’s followers.”

That spark of the divine lives within each of us.  We cannot give in to doubt or cynicism or despair.  The stories of Indonesia and America should make us optimistic, because it tells us that history is on the side of human progress; that unity is more powerful than division; and that the people of this world can live together in peace.  May our two nations, working together, with faith and determination, share these truths with all mankind.

Benedict XVI: Essays and Reflections on His Papacy, edited by Sister Mary Ann Walsh. This is a surprisingly engaging book, given that in essence it's a piece of public relations promotion to praise the current pope for his first five years as pontiff. Part of what make the book worth a look is that the photography is superb. It uses photos from the Vatican newspaper, L'Osservatore Romano, from Catholic News Service and from Catholic Press Service to give readers a look at the pope that is rare. In addition, there are lots of short essays by people, and some of them manage to convey a sense of the humanity of the pope. Clearly this is a book meant for Catholics, but don't hesitate to have a good look at it no matter what religion (or none) you are. It may give you a deeper understanding of the man at the top of the church to which more than 1 billion people belong.