What struck me most at this year's Table of Faiths luncheon in Kansas City last Thursday was what Bob Bacic, convenor of the Greater Kansas City Interfaith Council, said about one of the award recipients, Notre Dame de Sion High School:

"Sion is building the next generation of interfaith leaders." 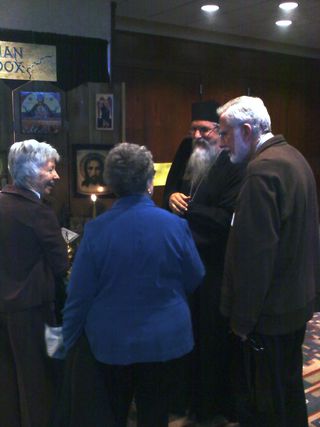 Indeed, Sion has become an important contributor to that necessary process. That task is in harmony with the roots of this independent Roman Catholic school. Back in the 1850s, two Jewish brothers, who had converted to Christianity, founded the Congregation of the Sisters of Our Lady of Sion in France, which eventually helped to give birth to Notre Dame de Sion at 106th and Wornall Road in Kansas City.

This Jewish-Christian origin helped to spur an interest in Jewish-Christian dialogue, especially after the Holocaust, and the recognition that anti-Judaism in Christian history helped to create the poisonour atmosphere in which modern antisemitism (without which the Holocaust is inconceivable) could flourish. (For my essay on that subject, look under the "Check this out" headline on the right side of this page.)

Notre Dame de Sion in recent years has taken a position of leadership in introducing young people to the concept of interfaith dialogue -- a kind of conversation that is not aimed at creating one mushy religion for all but, rather, is aimed at helping people of different faiths understand and respect the faith commitment of others. (Almost inevitably, this leads to a deeper commitment to one's own faith.)

Through the school's interfaith club and its work with the Kansas City Interfaith Youth Alliance, Sion is helping young people to be able to articulate their own faith more clearly even as they learn about the faith of others. The school's high school academic dean and mission director, Kay Walkup, deserves considerable credit for steering this ship, though many others also have helped.

As sectarian strife sets parts of the globe aflame, the task in the United States is to find ways to live in religious harmony in a multi-religious society. I'm not sure where all our needed interfaith leaders of the future will come from, but I'm grateful that at least some of them are being nurtured at Notre Dame de Sion, whose student body is 77 percent Catholic.

But Sion can't do this alone. So I hope you'll find ways to support the KC Interfaith Youth Alliance and will encourage your own faith community to help grow the next generation of interfaith leaders.

(The photo here today shows Father Paisius Altschul (in the beard) talking with people at the "Orthodox Christian" display table at last week's Table of Faiths luncheon. Altschul pastor of the St. Mary of Egypt Serbian Orthodox Church at 31st and Troost in Kansas City.)

In one of the more fascinating recent stories to come out of the Islamic world, a blogger in a West Bank town has been arrested for claiming online to be God and for insulting the Prophet Muhammad. He did all of this anonymously on Facebook and on blogs, creating lots of anger and dissent among readers. Essentially he was promoting an atheistic view of things, though clearly in an over-the-top sort of way. And now the question is how much freedom there is in predominantly Muslim societies to engage in this kind of criticism of religion. Clearly, not as much as in some other cultures. But as I ponder this case, I wonder what course he might have taken had such dissent been not just allowed but been constitutionally protected. My guess is that his disparaging remarks would have been met with more of a ho-hum attitude. Seeking to prevent the holding of some opinions almost always winds up giving those opinions more attention than they'd otherwise and than they might deserve.