Some North American and European Christians (now, even combined, a minority voice in global Christianity) find it surprising that one of the most important early voices in the faith came from Africa. 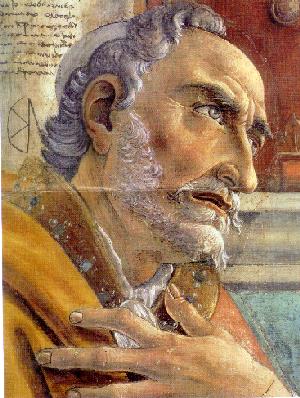 But it's true. And this weekend is a good time to remember that, because St. Augustine (depicted here) was born Nov. 13, 354, in northern Africa. (That area also was the home of early church leaders Tertullian and Cyprian.)

Augustine was born to a pagan father and Christian mother in the a backwater town of Tagaste in Numidia, territory that is now Algeria and part of Tunisia. Today Augustine is considered the greatest of the Latin church fathers. But in his early days he believed that Christianity is not for intelligent people.

Indeed, he was attracted to his father's approach to life, so as a young man he lived a dissolute lifestyle. Eventually he went to Carthage for university studies and there ran into some influences that would shift his focus. First, he read Cicero’s writings. Cicero told him to seek wisdom, and Augustine made this the great drive of his life. He also embraced Manichaeism with its stark emphasis on dark and light, black and white.

After spending time in Rome, Augustine eventually wound up in Milan, and there under the influence of Ambrose, an educated patrician who had embraced Christianity, Augustine came to faith in Christ.

Augustine eventually became bishop of Hippo in northern African and produced his extraordinarily influential book Confessions. His life is taken up wrestling with the problem of evil and seeking to deal with such heresies as Pelagianism and Donatism. And he was a proponent of the idea of "just war."

Well, there is much, much more about Augustine that is important to Christianity even today, so I encourage you at least to read Confessions and perhaps The City of God. And the link I've given you to his biography in the second paragraph here may give you other paths to follow if you want to know more about this fascinating man.

(As to the debate over how to pronounce his name, I go with au-GUS-tin, versus the Florida city of St. Augustine.)

CIVILITY GIVES IT A GO

Pope Benedict XVI has written a letter to Iran's goofy president, Mahmoud Ahmadinejad, in response to an earlier letter from him. Well, good try. I'd have done the same thing, probably. But all of us, the pope included, should know that, in the end, it's impossible to reason with irrationality, and Ahmadinejad is nothing if not irrational -- irrational like a fox, perhaps, but irrational nonetheless.

Begat: The King James Bible & the English Language, by David Crystal. The King James Version of the Bible will turn 400 next year, and yet its influence in so many ways remains pervasive. Until I was a teen-ager, the KJV was the Bible used in my Mainline Protestant church. Thus it's the one I used when memorizing various passages that still stick with me today. The author, one of the premier authorities on the English language, decided to try to figure out just how pervasive the uses of phrases derived from the KJV still is today. This fascinating book is the result. In the end, Crystal has found more than 250 phrases in regular use ("death, where is thy sting?"; "God loves a cheerful giver"; "judge not" and on and on) that trace their origin to the KJV, which in some instances picked up the wording from even earlier English translations. What amazes Crystal is the many ways in which these phrases are used today that have nothing to do with their biblical origin. Indeed, many people regularly spout these phrases but are biblically illiterate and, thus, miss many layers of meaning in what they themselves are saying. But why should that surprise us? After all, there's nothing new under the sun. And yet perhaps those who are quite content in their ignorance should remember that pride goeth before a fall.

P.S.: This Fox News story is getting some play this weekend, and although there may be less here than meets the eye, I think it's worth finding out how and why Anwar al-Awlaki, an al-Qaida cleric now thought to be hiding in Yemen, was allowed to be among the several questionable people allowed to conduct or participate in prayer services on Capitol Hill. Fox says that al-Awlaki is the lone American on the U.S. government’s capture or kill list.