Now that the U.S. Supreme Court has heard arguments in the case of the Fred Phelps gang picketing a military funeral, two questions remain: 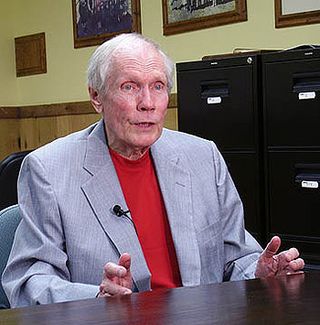 1. How will the court rule? My answer: The court should rule in favor of free speech, despite the fact that the Phelps clan and its tactics disgust every civilized person. Religious scholar Stephen Prothero agrees with me. As does the author of this excellent Slate.com commentary, written from the courtroom on the day the case was heard.

2. What about the underlying issue of Phelps' twisted theology? My answer: Faith communities everywhere, but especially Christians, have an obligation to reject the outrageously homophobic, hate-your-neighbor message that comes from Phelps' ridiculous Westboro Baptist Church in Topeka. (Warning: Enter the church site with caution. It, too, will disturb and disgust you.)

As for question No. 1, let me reiterate that I detest Phelps (pictured here) and everything he stands for. He has picketed me personally several times and has even accused me of causing the death of my nephew who perished as a passenger on the first plane to hit the World Trade Center on 9/11. How did I do that? Phelps says my nephew's death was punishment for my advocating equal civil rights for gays and lesbians. That's how malevolent and depraved this man and his followers are. Nonetheless, as I've written before, if we begin to undo our freedom of expression, we put the nation on a slippery slope toward tyranny. We must allow Phelps to spew his venom even if it makes us retch. Otherwise what is to prevent a court some day from ruling that I am not free to call Phelps malevolent and depraved?

As for question 2, many churches do well at this, but many continue to preach the message that gays and lesbians are subhuman and deserve neither respect nor equal civil rights. It is an abominable message derived from a long misreading of scripture. For details, I refer you to my essay on what the Bible really says about homosexuality. You can find it under the "Check this out" headline on the right side of this page. This anti-gay garbage reaches its logical conclusion when people such as Bishop Eddie Long, now in the midst of his own gay-sex scandal, denounce gays and say they "deserve death." The good news, as evidenced in a recent Pew Forum survey, is that support for same-sex marriage (an indication of how people generally view gays and lesbians) is growing.

The task of faith communities everywhere is to stand against the hatred spewing from the mouths of Phelps, Long and others and to work toward a society in which everyone is treated equally under the law and no one is considered somehow subhuman -- a category, by the way, in which the Nazis put Jews.

So I ask you what your faith community, if you have one, is doing about this. And if the answer is nothing (or worse), it's your job to help fix that -- no matter how the court eventually rules in this case.

ANY EXCUSE FOR RELIGIOUS ILLITERACY?

I liked columnist Ross Douthat's take on the recent Pew Forum survey showing how ignorant many Americans are about religion. I wrote about that poll the day it came out recently.