For the last several hundred years, theology has proved to be fertile ground for fertile minds. Indeed, in Christian terms, some of the best thinking and teaching has been done in the last 100 years by such giants as Karl Barth, Karl Rahner, Leonardo Boff, Paul Tillich, Reinhold Niebuhr, Jurgen Moltmann and, among many others, Pierre Teilhard de Chardin (pictured here). 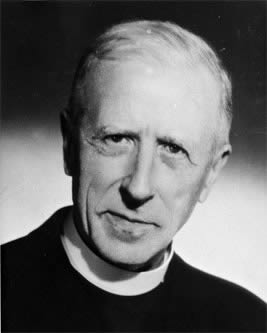 (The link I've given you in the previous sentence will take you to an interesting biography of Teilhard in which you will get a sense of how he struggled under restrictions imposed on his work by the Vatican.)

As you might imagine, the popularity of some of these theologians comes and goes, depending on many variables. Teilhard, for instance, has lost some of his attraction since his death in 1955, but a new generation is beginning to discover his ground-breaking work that connects the world of science to spiritual matters.

Indeed, Santa Clara University in California is planning a four-day conference next month on Teilhard in hopes of introducing people to this important Jesuit thinker. I wish I could attend. I'm intrigued by Teilhard but am far from an expert in his thinking.

Teilhard has been influential particularly among scholars and religious thinkers who have sought to find ways to understand how Darwinian thinking about evolution can be accommodated within Christian theology. (The book to read is God After Darwin, by John F. Haught.) And people interested in Process Theology also have drawn on Teilhard's thinking.

My own Christian experience shows me that countless Christians seem uninterested in what the theologians of our era are saying. I never argue that to be a good Christian you have to have read many theologians and grasped the nuances of their arguments. But theologians of every faith wrestle with the eternal questions. And, in the end, what other questions are there?

A BISHOP SPEAKS TO GAY TEENS

The bishop of the largest Lutheran denomination in the country, the Evangelical Lutheran Church in America (ELCA), has added a video to the many messages from leaders to gay teens that life will get easier for them in the years ahead and that they should not despair. It's exactly the right message. All faith communities should be finding ways to support young gay and lesbian people and to help them respect themselves. To watch the video from Bishop Mark Hanson and read other ELCA material on this subject, click here.

P.S.: As you know, the terrorist explosive devices discovered and defanged Thursday and Friday were aimed at Chicago synagogues. In case you missed it, the rabbi at one of those synagogues was my friend Michael Zedek, rabbi emeritus of Temple B'nai Jehuda in Kansas City (now Overland Park). Michael is quoted in this Wall Street Journal piece.