T \he story of the 14th Dalai Lama, born Tenzin Gyatso, has fascinated me for a long time, especially because when he escaped from Tibet in 1959 he first came to Musoorie, India, which is where I went to boarding school for a time in 1956. 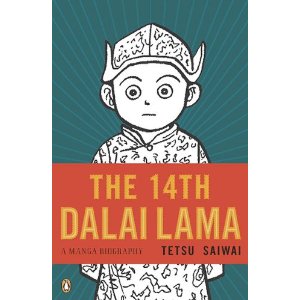 And yet I was a little surprised to find his story told in Manga art in a new book. Indeed, at first glance I was hesitant to imagine that this could be anything like a serious treatment of this remarkable man's life.

But The 14th Dalai Lama: A Manga Biography, by Tetsu Saiwai, is fascinating.

Before reading it, I had never even heard of Manga. The link about Manga I've given you above will take you to a Wikipedia site (I generally am quite cautious about Wikipedia entries because of their reputation for inaccuracy) that describes this Japanese style of cartoon storytelling.

The art is intentionally overwrought. Emotions are exaggerated so half of the faces in this book seem to be screaming, with beads of sweat popping from their heads. It's a little like Pow!-Bam! Batman art.

The story of the Chinese invasion of Buddhist Tibet in 1950 and the brutality that continued -- indeed, that still continues today -- seems even more heartbreaking because of the way the Manga art renders the story. The same year that the uprising of Tiananmen Square happened, 1989, the Dalai Lama received the Nobel Peace Prize. Like this year's prize to a Chinese dissident, Liu Xiaobo, it was a repudiation of the Communist regime's negation of basic human rights.

This new book may seem like it's designed for youthful readers, but I found it both informative and engaging and I think other adults will, too.

Another Tea Party-backed candidate has stirred up controversy with the release of a 2009 video clip showing Ken Buck, the GOP candidate for U.S. Senate from Colorado, saying he doesn't support the idea of separation of church and state. This report notes that this is the third time a Tea Party-connected candidate has kicked this hornet's nest. In some ways it may be a good thing that all this is on the public's radar screen. It reminds people that although the words "separation of church and state" aren't in the U.S. Constitution, case law has demonstrated that the concept is there. Plus, this gives people a chance to be reminded of what the First Amendment is all about.