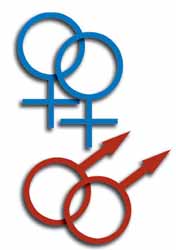 The concern here, among many other things, is that the negative messages coming from congregations may be contributing to suicide among young gays and lesbians.

I want to look more deeply into this study today and also to point you to this interesting blog posting that argues -- correctly, in my view -- that there can and must be no constitution prohibition to same-sex marriage if we are to take seriously the Constitution's promise to treat all citizens equally under the law.

One intriguing finding in the PRRI survey was this: "Of all religious groups, white evangelicals are most likely to give their own church high marks for handling the issue of homosexuality."

Why do you suppose that is?

My guess: They are happy to have their churches confirm their own prejudices against gays and lesbians. And that is exactly what many of their churches do by what I believe is a misreading of the biblical texts -- a misreading that does eisegesis instead of exegesis. In eisegesis, one brings one's own ideas to the text and then pretends to find them there as if they were there in the first place. In exegesis, one extracts from the text as close to the original meaning as it's possible to find.

By reading one's own prejudices into the text, it's possible to use the Bible to justify condemnation of homosexuality, to justify slavery, to justify oppression of women and to justify lots of other stuff that should be condemned.

I don't want to take up more space here today talking about what the Bible really says about homosexuality, but if you want to read my thoughts on that subject, look for them under the "Check this out" headline on the right side of this page.

The just-ended Synod of Middle East Bishops has called for a two-state solution to the Israeli-Palestinian conflict. It's the only solution that makes sense and that has a chance of being fair and equitable to all. But the bishops' position has been undermined by anti-Jewish remarks from one of their number -- remarks I wrote about here yesterday. Which means that the call for a two-state solution will have less impact and influence than it would have had that archbishop kept his mouth shut.

More Glimpses of Heaven: Inspiring True Stories of Hope and Peace at the End of Life's Journey, by Trudy Harris. Increasingly, people with terminal illnesses are making use of hospice services, whether in their homes on in stand-alone facilities. And the medical staffs that care for such people wind up with amazing stories of healing and peace. The author of this book has been a hospice nurse for a long time and in this and a previous book has gathered together compelling stories of how people have faced their deaths with courage and hope. Two brief additions: 1) At 6:15 p.m. tomorrow at Second Presbyterian Church, a hospice chaplain and I will wind up a four-week series on end-of-life issues by talking about the legacies we wish to leave. 2) Full disclosure: I serve as a board member of Kansas City Hospice and Palliative Care, a non-profit agency. My board service is uncompensated.