I  have been doing a more careful read of Duke theologian Stanley Hauerwas' autobiography, Hannah's Child, than I had a chance to when I first told you about the book in this blog entry. I published that entry not long after I heard Hauerwas deliver a lecture at a Kansas City area church. (Hauerwas is pictured here.) 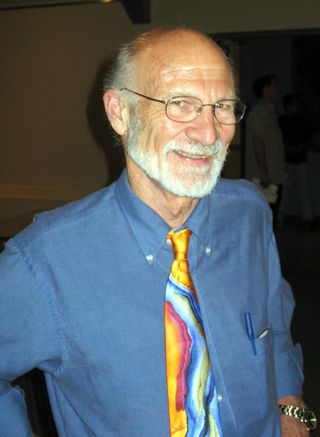 And in an odd coincidence of timing last week I ran across Hauerwas' comments about how he writes just when I had spoken to author Bruce Feiler about the power of words in the Q&A after Bruce's keynote speech to this year's Kansas City Festival of Faiths.

Which is exactly the point Hauerwas makes in his book.

"I discovered," he writes, "that I had to write to explore (my) convictions. I continue to do so. My writing is exploratory because I have no idea what I believe until I force myself to say it. For me, writing turns out to be my way of believing."

Yes, yes. It takes the discipline of shaping my thoughts with words before I can affirm doctrine, before I can see patterns, before I can erect anything like a rational framework around religious ideas. I'm not suggesting that mystical experiences aren't true experiences or that silence cannot speak to us. Indeed, sometimes silence is the only thing that makes sense.

But for me, little about faith experiences make sense without words that help me shape those experiences. And yet I must always remember that all words -- even those in sacred writ -- are always metaphor and, thus, always inadequate, when speaking of eternal things.

Oh, my. Now we've got a Catholic archbishop preaching radical supersessionism -- the idea that Christianity has irrevocably replaced Judaism and thus made Judaism obsolete and irrelevant. It's the ultimate anti-Jewish libel, the kind of trash-talk that was so prevalent in the Middle Ages (look under the "Check this out" headline for my essay on anti-Judaism in Christian history). The offending cleric, Archbishop Cyril Salim Bustros, made the remark after a meeting of Middle East Catholic bishops, a meeting chaired by Pope Benedict XVI. The gathering was supposed to focus on the increasing persecution of Christians in the Middlle East, but it obviously turned into an Israel-bashing session -- and, worse, a Judaism-bashing opportunity for Bustros, archbishop of Our Lady of the Annunciation in Boston. The pope needs to speak out against this theological whipping.

P.S.: Speaking of words, as I was above, how about handwritten words? That's what scribe and illustrator James Pepper of Dallas has used to produce his unique Pepper Bible. I wrote about this some years ago for The KC Star when I also wrote about the Saint John's Bible. Now Pepper has arranged for part of his Bible -- the Gospel of Luke -- to be available on iPad. For details, click here. While you're on Pepper's site, take time to view the YouTube video about his remarkable work.