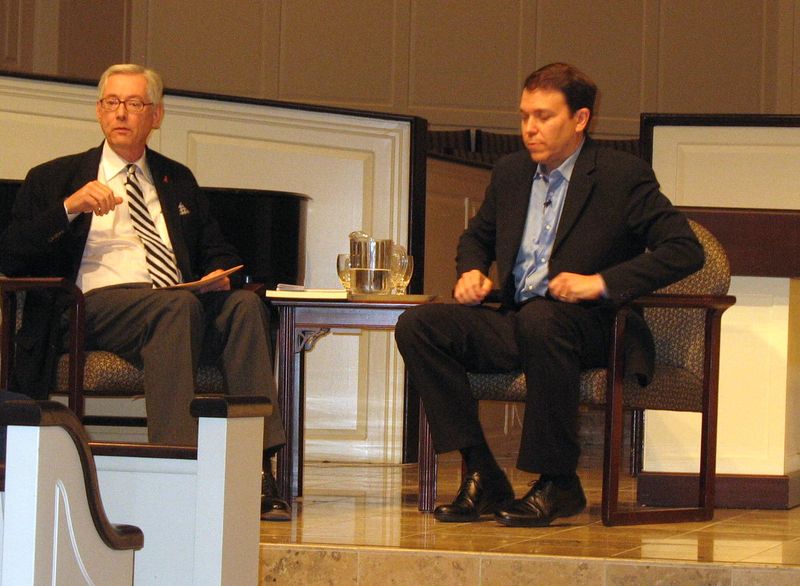 This year's Festival of Faiths of Kansas City is off and running. Author Bruce Feiler, the keynoter, engaged a sanctuary full of folks at Village Presbyterian Church with his remarks Tuesday evening and by the responses to the questions I asked him after he spoke. (The picture above shows us in the Q&A session.)

The next day, Feiler spoke (shown in the photo on the left) to a gymnasium full of Christian, Jewish and Muslim students gathered at Notre Dame de Sion High School. In both venues, though he told different stories and approached the subject in different ways, his message was the same: 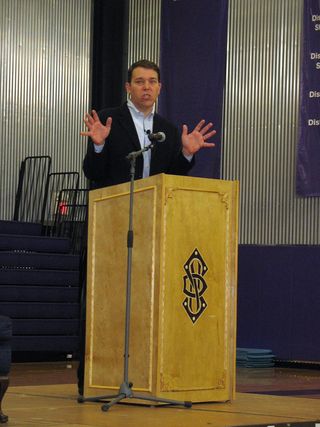 Interfaith dialogue is "the most important conversation of the 21st Century." We simply must learn to live in religious harmony, he said, and we do that not by giving up our own commitment to our own faith tradition but, rather, by learning about the faith commitments others make and respecting their freedom to make such choices.

I taped his primary address at Notre Dame de Sion -- which focused on the importance of interfaith dialogue much more than did his talk at Village -- and you can listen to it by clicking on this link: Download Feiler-NDS. It runs about 14 minutes and is a bit tinny because of the echo in that large space. But I think it should give you a sense of this bright young writer and thinker. After he spoke, the Rev. Brian Ellison served as moderator for the Q&A, and the students had lots of good questions.

In our Tuesday night conversation we spoke about people who bind themselves to an exclusivist interpretation of their faith tradition. Yes, Feiler said, you can find that exclusivism in all three Abrahamic faiths (and probably others) but you also can find an interpretation that is much more inclusive and welcoming in each faith. The issue is which one you choose.

And when he spoke to the students at Notre Dame, he said it's an error to get discouraged because a certain percentage of people want no part of interreligious contact or understanding. Instead, he said, remember that the majority of people are willing for such dialogue. They simply need to be asked and encouraged to participate. That, he told the students, is your job. Indeed, that's exactly the purpose of the new Kansas City Interfaith Youth Alliance.

I've said over and over again here and in other venues that interfaith harmony is the call of the 21st Century. And I'm glad I live in a city in which people are trying to live that out. We all simply need to invite more people into the conversation -- and then the conversation must lead to constructive action. Feiler's two appearances for the Festival of Faiths were good reminders to all of us of exactly that.

(Other Festival of Faiths events are coming. The link I gave you in the first paragraph above will take you to a page that will tell you about them.)

A new survey from the Public Religion Research Institute shows Americans give faith communities low marks when it comes to handling issues of homosexuality. No surprise. So many religious groups seem to treat gays and lesbians as subhuman. It's appalling. I plan to delve into this survey in more depth here next week. But if you want to read the survey itself now, click here.