Last month in this blog entry, I wrote about efforts to return to Jews the property and art looted from them by the Nazis in and just before World War II. 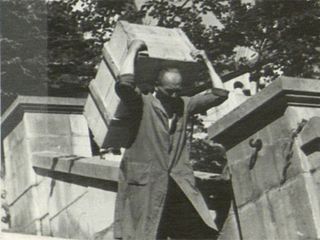 There's been a new development in this field from the Conference on Jewish Material Claims Against Germany, known as the Claims Conference. It reports that "Nazi records and photographs of the looting of more than 20,000 individual art objects from Jews in France and Belgium are now online in a searchable database."

The Claims Conference says that museums, art dealers, and auction houses should consult this new listing, which is searchable by item, artist, owner and whether items have been returned, to determine whether they hold any Nazi-looted art. Families seeking valuable heirlooms also should be looking at this online collection.

The searches can be conducted through this site. The primary focus is on objects looted by what was called the Einsatzstab Reichsleiter Rosenberg (ERR), a “Special Task Force” that plundered art from French Jewish and a number of Belgian Jewish collections from 1940 to 1944.

As for the photo here today, here's what the ERR site says about it: "ERR depot of Neuschwanstein, Germany—Worker carrying crate of looted cultural property on his shoulders for loading onto a truck headed for the ERR art repository codenamed “Lager Peter” in the salt mines about Altaussee, Austria, 12 June 1944."

The question of what the First Amendment to the Constitution says or doesn't say suddently came up this week in the Delaware race for a U.S. Senate seat, and the GOP candidate, Christine O’Donnell, has been taking heat for seeming not to know what the First Amendment says. One of those criticizing her is Stephen Prothero, whose book Religious Literacy I much admire. Click here to read what he has to say about all this. My guess, however, is that as goofy as O'Donnell sounded on this issue, she was mostly trying to repeat the old news that the actual phrase "separation of church and state" is not found in the Constitution. Which is true. But the concept is there and case law based on the Constitution has established the principle firmly in American jurisprudence. What many people don't seem to get, however, is that the concept of separation of church and state is meant to keep the government out of religion, not religious people from offering their ideas in the public square.

P.S.: My latest column for The National Catholic Reporter now is online. To read "Coming back to a sustainable pace of life," click here.