Like it or not, each of us is a theologian -- even people who describe themselves as atheists, agnostics, freethinkers or even misotheists. 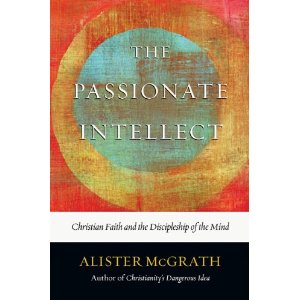 That's because each of us ultimately comes to some conclusion about whether God exists and, if so, what the nature of God is.

So the question is not whether we'll be theologians. The question is what kind of theologians we'll be. For many people of faith, sadly, the answer is: uneducated, careless or sometimes know-it-all. Instead, I think we're called to be thoughtful, educated and modest theologians, recognizing that our finite minds cannot, in the end, fully grasp the infinite.

But to reach that point we need help. And one of the best new books to help Christians in this endeavor today is The Passionate Intellect: Christian Faith and the Discipleship of the Mind, by Alister McGrath.

McGrath holds the chair of theology, ministry and education and heads up the Centre for Theology, Religion & Culture at King's College in London. Prior to that he taught at Oxford. He's an excellent writer and a wise thinker.

McGrath doesn't want us to throw away the ways in which faith can and does affect us emotionally and even mystically. Rather, while holding on to that, Christians, he says, should "appreciate that there remains an intellectual core to the Christian faith. We cnanot love God without wanted to understand more about him."

Indeed, that's precisely why I've spent most of the last 50 years of my life, starting as a teenager, reading mostly theology. I have a hunger to understand more deeply why I believe what I believe and why it moves me to act in certain ways and not in others. I've always thought that, in the end, the eternal questions are the only questions.

McGrath here encourages this pursuit, suggesting that not only is it not crazy but it's necessary if we're to hold on to a faith that makes sense, that's somehow coherent as well as transformative.

If you've been longing to dive a little deeper into Christian thought and life, this new book would be an excellent place to start.

TALKING WITH THE TALIBAN?

When people of faith dive off the deep end and use their religion to justify terrorism and other forms of violence, at what point are the rest of us obligated to invite them into rational conversation? In some ways that's the issue now in Afghanistan. This intriguing piece makes the case for sitting down and talking seriously with the Taliban now. What may prevent that very thing is the failure to distinguish between and among elements of radicals who use Islam to justify their ways. Clearly there's no use talking to the Osama bin Ladens of the world. Instead, he and his al-Qaida thugs need to be captured and imprisoned for life. But there appear to be elements within or attached to the Taliban who may be open to reason. May. It's not yet clear. I think the Kabul government and its U.S. and allied backers must move with extreme caution as they consider a negotiation session with Taliban representatives. But to refuse such a possibility outright is to paint all radicals with the same brush and thus to engage in the very binary thinking that plagues so many of the radicals.

P.S.: My latest column for The National Catholic Reporter now is online. To read "Coming back to a sustainable pace of life," click here.