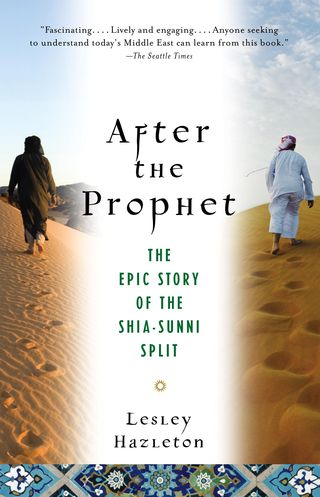 In the wake of a difficult few months of badly strained relations between Muslims and non-Muslims in the U.S., to say nothing of the world, It's time for those of us who are not Muslims to devote ourselves to understanding that ancient world faith better.

Of course, it's also time for Muslims to gain a better understanding of faiths other than Islam, too.

Knowledge can drive out fear, whereas ignorance engenders fear, prejudice and even violence.

So for non-Muslims today let me recommend two books -- one hot off the press, the other a necessary reissue of a 2004 book.

The first is After the Prophet: The Epic Story of the Shia-Sunni Split, by Lesley Hazleton. It is one of the more fascinating and well-written books I've read this year.

In astonishing detail -- almost as if one were reading a daily newspaper from the 7th Century -- the author describes how Islam divided (today 80-some percent of Muslims are Sunni, the rest Shi'a, not counting the small mystical branch of Islam known as Sufism). The story is remarkable, sad but somehow fully human, with love, power and grudges all playing a part.

It's a brilliantly told tale that has implications not just for the history books but for what's happening today. And it helps all of us understand more clearly the life of the Prophet Muhammad and the era in which he lived.

As she writes near the end of this important book, "By now it is clear that anyone so rash as to think it possible to intervene in the Sunni-Shia split and come away unscathed is at best indulging in wishful thinking. It may be tempting to imagine that if the Bush administration had known the power of the Karbla story (Tammeus note: That story is exhaustively told earlier in the book), American troops would never have been ordered anywhere within a hundred miles of the holy cities of Najaf and Karbala, but that too is wishful thinking. As with Yazid in the seventh century, sow ith George Bush in the twenty-first, history is often made by the heedless."

As someone who writes about religion, I certainly was aware of the basic outline of the story told in this book, but it's the details and the way those details are spun out in this book that are breathtaking. (For instance, check page 44 for a fascinating description of how use of the veil for women came to be introduced.)

A second book I want non-Muslims to know about is by Feisal Abdul Rauf, the imam who has proposed that controversial Islamic community center near Ground Zero in New York. It's What's Right With Islam: A new Vision for Muslims and the West.

Rauf is not afraid to describe where he thinks Muslims, including Muslim scholars, have gotten Islam wrong in ways that have been disastrous for both Islam and the world. This is an honest, clear book of hope. If only all the spewers of anti-Islamic prejudice one hears on the airwaves and across the Internet would read and pay attention to what Rauf is proposing. But, as the author of the first book mentioned here today has said, that may be wishful thinking.

As I said earlier, it also is the responsibility of Muslims to gain a clearer understanding of other faiths, including Christianity and Judaism, which are, like Islam, Abrahamic traditions. There are lots of books they might read to begin this process, but perhaps the one to start with is Stephen Prothero's Religious Literacy: What Every American Needs to Know -- And Doesn't.

It is an excellent primer on religion and can serve as an introduction for Muslims to faiths other than Islam. After that, check out the "For Further Reading" section in the back of Prothero's book for guides on several religions.

Friends, as we learn about religious traditions beyond our own, we'll probably find that this renews our commitment to our own faith. And as that happens, we can view the faith commitments of others not with hatred and suspicion but with respect, no matter how much we disagree with them. That's how we will learn to live in religious harmony in this increasingly pluralistic society.

I'm always intrigued by efforts to translate sacred writings into new languages. And now comes this story of a man who spent 17 years translating the Bible into Vietnamese. I wondered if this had been done before by someone else. So I checked with the Wycliffe Bible Translators, but a spokesman there couldn't tell me, and the Web sites he gave me to check turned up nothing. But a quick Google search turned up this Vietnamese online version. Now, there are dozens and dozens of different English translations of the Bible, so why not more than one Vietnamese version -- even if it took one man 17 years to do it?

P.S.: Don't forget to make plans to come to the 7 p.m. KC Festival of Faiths keynote address this Tuesday at Village Presbyterian Church. Author Bruce Feiler will be speaking and I'll moderate a Q&A with Bruce afterward.