A couple of years ago I heard the Vanderbilt New Testament scholar Amy-Jill Levine argue persuasively that what Christians call "The Lord's Prayer" is a wonderful Jewish prayer that, were it not so obviously associated with Christianity, Jews today might be able to pray with no trouble. 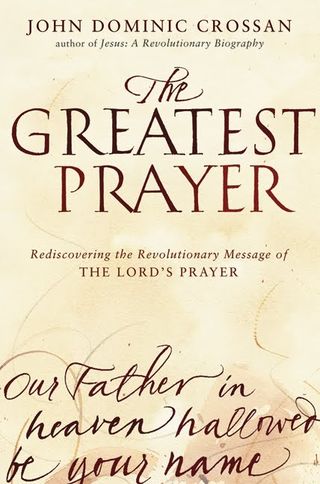 In fact, in her book The Misunderstood Jew, Levine, who is herself Jewish, calls the Lord's Prayer "an ideal prayer for a first-century Jew."

Levine's thinking was confirmed for me as I read John Dominic Crossan's new book, The Greatest Prayer: Rediscovering the Revolutionary Message of the Lord's Prayer. Crossan describes the Lord's Prayer as "a revolutionary manifesto and a hymn of hope not just for Christianity but for all the world. Better, it is addressed from Christianity to all the world. Better still, it is from the heart of Judaism, through the mouth of Christianity to the conscience of the earth."

I entered Crossan's new book with reservations. Crossan, who 25 years ago next month co-founded the Jesus Seminar with the late Robert Funk, represents to me some of the scholarly silliness and triviality of the Jesus Seminar. Beyond that, the Jesus Seminar folks have always seemed to me much more interested in talking about what they don't believe rather than what they do, and, along with some insightful scholarship, they have been advocates (especially Funk) of dismissing traditional Christianity as hopelessly wrong.

If you want to know more about what's been amiss with the Jesus Seminar, read The Real Jesus by Luke Timothy Johnson. It's a bit dated (1997 publication) but it gets most of this right.

So I was pleasantly surprised to find Crossan here being not just insightful -- if too willing to digress -- but also willing to reveal a man of faith who himself wrestles with how to live an authentic Christian life.

There must be a hundredyskillion books on the Lord's Prayer. And a zillion times that many on Jesus. So you wonder what a new look at this prayer might reveal.

Well, in the spirit of Amy-Jill Levine, Crossan here offers a foundational prayer in part as a way of improving interreligious understanding, especially between -- but not limited to -- Christianity and Judaism. And he concedes that he meant to provoke a response by naming the Lord's Prayer "the greatest" to see if people of other faiths might offer one of their own.

For Judaism, that almost certainly would be the Sh'ma, found in Deuteronomy 5. The Sh'ma has become what my book writing colleague Rabbi Jacques Cukierkorn, in his book Accessible Judaism, called "the central prayer in Judaism."

Did I find things about this new Crossan book that bothered me? Yes. I'll mention just one. He repeated the old (and misleading) wisdom that the term "Abba," which Jesus used to refer to God, "is a more intimate address to God, similar to our 'Daddy'. . ." But as Levine writes in her book, "Even Joachim Jeremias, the scholar who first proposed the translation 'Daddy' along with its unique attribution to Jesus, retracted his thesis and called it 'a piece of inadmissable naivete.'" And yet four years after Levine's book, Crossan repeats the "naivete" in his book -- and by the same publisher.

Still, Crossan's book is worth a read and might well serve as a good book for study groups from congregations of nearly any faith -- as long as the group is led by someone who can serve as a corrective when Crossan goes amiss.

HOW TO COMBAT RELIGIOUS ILLITERACY

The wise columnist Clarence Page looks at the religious ignorance survey I wrote about here yesterday and suggests that it should lead us to teach our children -- all children -- about religion in our schools. He's right.