The other evening my wife and I attended a performance of the musical "Saved" at the Kansas City Reptertory Theatre. 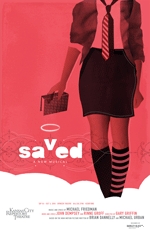 And although it was an enjoyable evening, it brought home to me again how difficult it is to raise questions of faith in a dramatic (or sometimes comedic) setting -- without resorting to cliches and without achieving more than a surface look at things.

"Saved" is set in a Christian high school run by a flawed pastor whose seems not to understand the ways in which rules must be mediated by love. Naturally, because it's a play for the 21st Century, it deals with teen pregnancy, abortion, religious differences, homosexuality and marital infidelity. About the only thing missing was an interracial dispute about climate change.

Much of the singing was engaging, as was some of the dialogue. The staging, almost inevitably, involved overly dramatic set pieces, such as a huge lighted cross and fake clouds to suggest heaven. Apparently minimalism has been minimalized to zero.

Indeed, much of the theology expressed directly or indirectly by the acting company seemed limited to the question of how to get to heaven. One of the students played a Jewish girl, and that, of course, brought up the endlessly debated question of whether a commitment to Jesus Christ is necessary for personal salvation.

The kind of Christianity on display among students and adults in the play would be familiar to followers of Pat Robertson and the late Jerry Falwell but it did not represent the Christianity of millions of Americans in Mainline, Catholic, Orthodox and other branches of the faith. There was, of course, no effort to explain the narrow choice of the playwright.

Well, in the end, my bride and I decided that the acting company did pretty well with the material but that on the whole it was just an evening of shallow entertainment. Yes, it did engender some deeper conversation but to get there we had to get past the stereotypes offered by the play.

So if you had to pick a play or movie that dealt seriously with religious issues without relying on caricature, what would you pick? You can e-mail me your answer to wtammeus@kc.rr.com.

FROM NEO-NAZI TO ORTHODOX JEW

A friend in Warsaw, Poland, recently alerted me to a CNN documentary that he said had been shown on that news network's international version, though if it's been available on CNN in the U.S. I've missed it. It's a fascinating story of how a neo-Nazi skinhead and his wife there discovered that they're Jewish. Sort of like the old Groucho Marx joke, the man's instincts were to refuse to to be part of a group that would agree to have him as a member. But as he spoke at some length with Michael Schudrich, the chief Orthodox rabbi of Poland, he came to understand that his anti-Jewish prejudices were wrong. Today he's an observant Jew. When my co-author, Rabbi Jacques Cukierkorn, and I were in Poland to do interviews for our book, They Were Just People: Stories of Rescue in Poland During the Holocaust, Schudrich told us that people come to him every day to ask for his help because they think they might be Jewish -- an identity that was suppressed by their parents or grandparents in order to survive the Holocaust. At any rate, the CNN story is worth reading and watching.