As you know, much of the controversy having to do with Muslims in America in recent months has centered on the proposal to build an Islamic community center near Ground Zero in New York. (For my views on why this is exactly where this facility needs to be located, click here.) 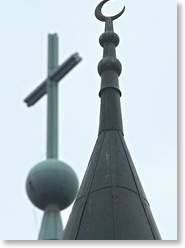 But in a country the size of the United States with a population that is predominantly Christian, you can be sure that there is more than one source of controversy about any subject, including Islam.

So the Pew Forum on Religion & Public Life has gathered up information about several dozen controversies in the U.S. having to do with construction of mosques and Islamic centers. Included in the Web site to which I've linked you in the previous sentence is an interactive map showing the location of these disagreements -- some of which are simply about traffic and congestion and not about religion directly. There are nearly 1,900 mosques in the U.S. at the moment, Pew Forum reports.

(By the way, my mentioning "mosques" leads me to repeat what I've said before, which is that "Ground Zero mosque" is deliberately misleading terminology. It's not at Ground Zero. It's 2.5 blocks away. And it's not a mosque, though it is to contain mosque prayer space for Muslims as well as prayer space for people of other faiths.)

The Pew Forum site also provides a link to this new report from U.S. Department of Justice on the 10th anniversary of the Religious Land Use and Institutionalized Persons Act. As the report note, "The law, which passed both houses of Congress unanimously and was supported by a broad coalition of religiously and ideologically diverse groups, addresses religious discrimination and government infringement of religious liberty in two areas: local land-use laws, such as zoning and landmarking ordinances, and the religious exercise of persons confined to institutions."

The report also asserts that since passage of this law, it " has helped secure the ability of thousands of individuals and institutions to practice their faiths freely and without discrimination."

And yet my guess is that lots of Americans don't even know the law exists. Well, have a look at the report today and a look at the mosque-controversy map. And then let's see how we might be agents for solutions that are fair to all. (By the way, it pleases me that no locations in Missouri or Kansas are on the map.)

Oh, and be sure to be back here tomorrow when I'll talk about an intriguing new study from the Pew Forum on religious knowledge in America.

Here's an interesting case of interfaith cooperation. Orthodox Christians have picked up support from Muslims for their desire to have religious education in schools in Bulgaria. In many ways, it's a rejection of 60 years of atheism under the communists. And, of course, there should be education about religion in public schools in the U.S., though not indoctrination in favor of any one religion. This might help to reduce the appalling ignorance about religion that many Americans show. Much more on this subject here tomorrow.