MANHATTAN, Kan. -- One of the joys of being on a college campus is the opportunity to have stimulating conversations about what matters. 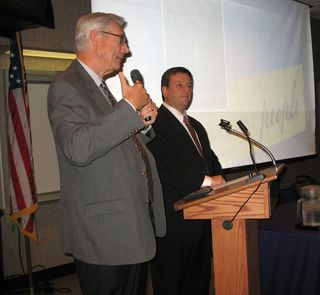 That's what my co-author, Rabbi Jacques Cukierkorn, and I experienced a few days ago at Kansas State University, which invited us to speak at its Community Cultural Harmony Week about our book, They Were Just People: Stories of Rescue in Poland During the Holocaust.

More than 60 people gathered in a room at the K-State Union to hear and talk about the difficult moral questions raised by our book -- questions about the value of life, about when and whether to risk life, about how people who disagree about many things can continue to be in respectful conversation.

After a relatively (on purpose) brief presentation, we opened things up for questions and conversation and were not disappointed. People wanted to talk about how the church in Poland in World War II might have differed in its approach toward Jews from the church in Germany. They asked about the controversy surrounding the proposal to build an Islamic community center near Ground Zero in New York City. And on and on.

The point, to me, was that we were engaging questions that really meant something versus the questions our culture often spends so much useless time pondering -- like whether this pop culture couple of that will break up or whether this network or that will cancel this or that sitcom. Puh-leese. Who gives a damn in the long run? I confess I don't even care in the short run.

One of the things both universities and faith communities do is to provide a forum for conversation about the truly important questions of life. K-State and the community of Manhattan have been providing this harmony week space for learning for more than two decades. I hope they're proud of that and will keep it up.

In an era when civil discourse is on the skids, we need more such opportunities for deep sharing of ideas in respectful ways.

NOW'S THE TIME TO MOVE TOWARD PEACE

Speaking of talking about important things in respectful ways, we seem to be an a crucial point in the newly restarted Israeli-Palestinian peace talks, and as columnist Roger Cohen argues, it's time for President Obama to insist that Israel extend its moratorium on building settlements. A great deal, indeed, is at stake here, and if the rap on the Palestinians' leadership has been that tt never misses an opportunity to miss an opportunity, that rap will fall on Israel if its action now explodes these talks. Yes, there is blame to go around, for sure, but the issue now on the table is the extension of the moratorium. There may well be breaking developments on this over the weekend, but as of Friday evening there was no new agreement, this report notes. On Sunday morning, the Jerusalem Post quoted a Palestinian Authority negotiator as saying only Israel's prime minister, Binyamin Netanyahu, could save peace talks by extending the moratorium on settlement construction.