You may recall the old joke about the woman at church who kept shouting out "Amen" and "Preach it, brother" as the pastor railed against one sin after another -- until he mentioned gossip. At that point the woman turned to her friend next to her and said, "Well, now he's just meddling." 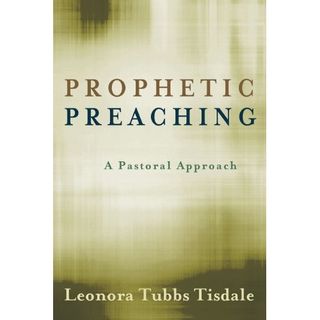 What that preacher was, in fact, doing was engaging in at least one variety of what's called "prophetic preaching." There are many definitions and types of prophetic preaching but, in essence, it is preaching that points to things that are wrong and need to be repaired.

In this case, "prophetic" does not mean telling the future. Rather, it means looking at the present and trying to let people know what it is about our lives, our relations or our society that is breaking God's heart -- and then it's offering an alternative vision for how to live.

In the end, if preachers of any religion are not engaging in prophetic preaching at least part of the time, I think they're wasting their time and the time of their congregants.

Leonora Tubbs Tisdale has written an insightful and helpful new book called Prophetic Preaching: A Pastoral Approach, in which she seeks to give pastors tools to help improve their prophetic preaching or to get them to preach in this way if they're avoiding it now. Tisdale, who now teaches homiletics at Yale Divinity School, has been in parish ministry, too, including at Fifth Avenue Presbyterian Church in New York City, from which Paul Rock, the new pastor at my own church, just came to Kansas City.

Yes, Tisdale's book is written for pastors, but it's in plain language and it can give those of us in the pews an excellent look at the various kinds of prophetic preaching we might expect -- or demand -- from our preachers.

After offering definitions of prophetic preaching from many sources, Tisdale avoids giving us her own but she does synthesize ideas about this genre in seven points, which (briefly) say that propehtic preaching:

* Is rooted in the Bible.

* Identifies evils, though more in the social or corporate realm than in the personal.

* Names not just "what is not of God in the world" but also points to the new reality God seeks to bring about.

* Gives courage to those who hear it.

* Requires the preacher's heart to break at those things that break God's heart.

Many people in the pews of congregations don't want their world views challenged. They want to be comforted, and wise prophetic preaching does that, too. But it refuses simply to comfort. Rather, it challenges, though ideally in ways that the congregation can hear and support. As Nora Tisdale makes clear, prophetic preaching insists that God's radical love wants better for us and for the world than perhaps we want for ourselves.

HOW MORE INCLUSIVE LANGUAGE CAN HELP

When the folks who started Alcoholics Anonymous were drafting words to explain their 12-step approach, it turns out, they edited out some explicitly Christian language to make the words more appealing to people of all -- or no -- faiths, this report says. Sometimes overt religious language can get in the way of the message religious people want to convey. I'll say more about that tomorrow when I review Leonard Sweet's new book on evangelism.

P.S.: My latest column for The National Catholic Reporter now is online. To read it click here.