I hope you'll forgive me a little personal nostalgia today. For it was on this date 40 years ago that I began my career at The Kansas City Star. These were pre-computer days when I typed on an upright manual typewriter. (The photo here today is not that typewriter but, rather, an old Woodstock model made in my hometown of Woodstock, Ill. It sits quietly on a shelf in my home office. One old Woodstock played a role in the Alger Hiss spy story. To read about that, click here.) 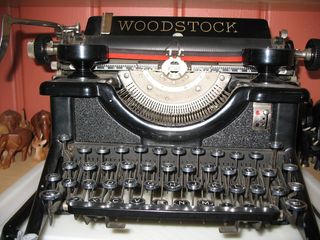 That career -- at least the full-time part of it -- ended in mid-2006 with my formal retirement. On my last day of work I was in Boston for a conference, but I wrote this piece about retiring then.

You can go back to that piece to see what I was thinking about my Star career -- which I extended until mid-November 2008 by writing a weekly Faith section column on a freelance basis. These days, in addition to this daily blog, I write a monthly column for The Presbyterian Outlook and a biweekly column for The National Catholic Reporter. You can access those columns by looking for them under the "Check this out" headline on the right side of this page.

What I want to invite you to think about today is both how short and how long 40 years is and how, in the Hebrew and Christian Bibles, 40 is a symbolic term that usually means "a hell of a long time." You find, for instance, Moses and the children of Israel wandering in the desert for 40 years. And you find  Jesus in the wilderness for 40 days, just as you find Noah on his ark for 40 days.

When I started at The Star in 1970, I already had three-plus professional years under my belt at the now-defunct Rochester (N.Y.) Times-Union. The raucous 1960s, which really didn't begin until 1961 or maybe 1963, were still roaring, and would until at least 1974,  no matter wht the calendar said.

Since I began at The Star, I've become the father of two, the stepfather of four and the grandfather of six. And I've written way more columns than I can count -- having written a daily column for nearly 27 years.

So much has changed over this "40" accounting, and I have learned an astonishing amount -- especially how ignorant of so much I continue to be. If you don't learn that, I'm not sure you ever learn anything.

So how will I commemorate 40 years today? Oh, I'll work a bit on the blog, do some church work and give a speech tonight (see "Where's Bill speaking" under the "Check this out" headline on the right). Also, I'll give thanks for my career and for readers like you.

SOMETHING ELSE TO ARGUE ABOUT

There's a fight on in Texas over how Islam is portrayed in school text books. Why do I think that this won't end well? And should I be worried that this involves the Texas Education Agency, or TEA? Perhaps another TEA Party?