WINFIELD, Kan. -- Before Rik Stevenson of "Trevor Stewart & Earthlines" played "Twilight Horizon" on a Native American flute, he told the "Walnut Valley Festival" crowd here the other day that the instrument had been blessed in a sweat lodge. 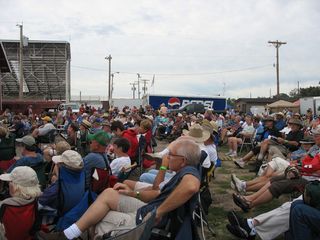 The blessing, he said, was meant "to heal the hearts of all who hear me play it."

I don't know if it was that blessing or something else, but the music (Stevenson was accompanied by musicians playing a Chapman Stick, steel drums and other percussion instruments) washed over me like baptism water.

I came to what I thought was a bluegrass festival. Well, it may have started out that way in 1972 (click on "archives", then "history") but today the range of music is wide and deep on four separate stages, each running simultaneously. And what I noticed was how so much of this music -- with roots in bluegrass, country and similar genres -- was, in fact, sacred music.

In the Earthlines' set, for instance, Stevenson also played a didgeridoo, which he said often was used in sacred ceremonies and healing. Just before Earthlines had performed, a Chicago couple called "Small Potatoes" sang a gospel-tinted song called "Someday" that talked about heaven and all the people who showed up there. And after Earthlines, a Kansas City band, "The Wilders," first sang a song with these lyrics, "Heaven bells are ringing and I'm going home, climbing over Zion's wall." It was one of two songs that the Wilders' fabulous fiddler, Betse Ellis, called "Ozark spirituals."

There is something about the human condition that requires music. It makes no logical sense to me, especially when I hear lyrics that make no sense. But clearly deep within the human spirit is a musician and magnet to attract the music of others. Each of us has our own preferences for the kinds of music we like, but it seems to me that one cannot be truly and fully human without some kind of music.

At the International Autoharp Competition here, for instance, the winner was asked to do an extra piece for the audience and she chose the famous hymn "Amazing Grace." More than that, she said to the audience, "Let me hear you sing a verse." So in this old fairgrounds building no doubt used for cattle shows, we all broke into "Amazing Grace." Everybody, it seemed, knew it.

And later, on another stage, I heard a couple known as "Notorious" perform what the vocalist, Eden MacAdam-Somer described as Romanian Jewish dance music. To hear a bit of that music, click on this link: Download Notorious

So thousands of people -- hungry for music, though perhaps not knowing why -- came here to Winfield (many camping out, as the picture here shows), put our feet up and were ministered to by tone, by rhythm, by whatever it is about music that resonates with our souls. And when we left we were much closer to being healed of whatever was amiss than when we came.

B-16 GETS PEOPLE TO THINK

By most accounts, the visit of Pope Benedict XVI to the United Kingdom was a success. As Britain's prime minister noted, the pope made citizens there "sit up and think." And thinking clearly is an important part of faith, despite what some folks say. Faith that is not in some way reasonable and thoughtful may not be faith at all but, rather, ideology.