A few weeks ago I was in Bloomington, Ind., for the annual conference of the National Society of Newspaper Columnists, and while there I visited the Tibetan and Mongolian Buddhist Cultural Center, started by the brother of the Dalai Lama. 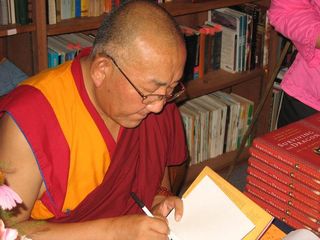 I wrote then a bit about meeting the head of the center, Arjia Rinpoche (pictured here -- his title in Tibetan means precious father). The title rinpoche indicates that Tibetan Buddhists consider the holder of that title a reincarnation of a previous Buddhist leader. The current Arjia Rinpoche is No. 8 to hold that title. At any rate, while I was there I bought a copy of his new book, Surviving the Dragon: A Tibetan Lama's Account of 40 Years Under Chinese Rule.

Oh, my. What a book. It is brutally frank. It tells engaging stories. It is full of heartbreak and joy. It is a tale of survival under the mindlessly inhumane Communist system and a story of eventual flight in the face of demands that Arjia Rinpoche could not meet and still look himself in the mirror.

Rinpoche was the abbot of the famous Kumbum Monastery in Tibet. In this book we learn not just the storied history of the monastery but also about its near destruction in wave upon wave of Communist oppression of religion -- an oppression that, though now less universal, still goes on today by the Beijing leadership.

The wonder is that Arjia Rinpoche managed to last in Tibet as long as he did. One reason he did, he candidly admits, is that from time to time he simply caved in under enormous pressure to Communist demands. As he did, he rose in political prominence. By the time he fled in the late 1990s he was the highest ranking Buddhist leader since the Dalai Lama (who fled in 1959) to escape Tibet.

Rinpoche came from a family of nomads, but some members of his family already were prominent Buddhist teachers connected with the Kumbum Monastery. His description of how he was selected as the reincarnation of the previous Arjia Rinpoche and how he then moved through Tibet's tortured history is at times breathtaking, sometimes funny, often sad, never boring.

Today, as I say, he leads the large Buddhist cultural center near the campus of Indiana University, where the Dalai Lama's brother was a teacher for many years.

For Arjia Rinpoche, that represents mostly a happy ending. And yet there remains great pain in his heart for his native Tibet, which Beijing has crushed politically but so far has failed to crush spiritually. In the end, the book is a reminder that none of us should let the Chinese Communists off the hook for what they have done -- and still are doing -- to Tibet and its Buddhist culture. It's a painful story of power unnecessarily brutalizing a people, and our own American government, along with others, should continue to pressure the Chinese leadership to make things right in Tibet.

Actress Julia Roberts says she has converted to Hinduism. No, the proper response to this news probably is not "Holy cow!" And, no, being Hindu doesn't mean you never have to say you're sari.

P.S.: I wrote here the other day about the proposal to build that mosque/community center near Ground Zero in New York City. As a follow-up, I want to share with you this excellent editorial from the Jewish newspaper, The Forward, about that subject. It's well said.