No doubt you're aware of the controversy surrounding the proposal to allow a mosque to be located close to Ground Zero in New York City.

(THIS JUST IN: A governmental body in New York City today voted 9-0 to clear the way for this mosque/community center.) 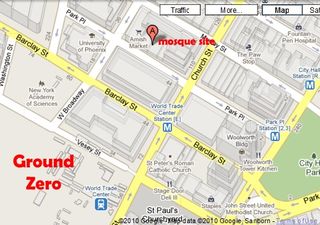 I've written about it a time or two here on the blog, making the point that a mosque there would be a good way for Islam to show people that what the hijackers did on 9/11 was a radical distortion of the religion.

The other day, a Jewish friend who lives in New York City wrote to me about this issue and suggested that a mosque near Ground Zero might be a way "to counter all the disgustingly primal, misdirected, infantile patriotism clogging national debate and action.

"The easy resolution would be no mosque so close to Ground Zero. Yet, there it is and wants to be. In a series of largely missed opportunities to define ourselves in the aftermath of 9/11, this is a tremendous opportunity.

"There's plenty of real estate down there; let's have a synagogue, church and Buddhist temple near the mosque. And then let the debate take a new turn." My friend's idea is that we might prove to ourselves "that from such horrific hatred we can evolve more peacefully, alongside one another."
My friend was reacting to the disquieting news that the Anti-Defamation League had announced its opposition to locating the mosque near Ground Zero.
Well, my friend is right. And, of course, there already are houses of worship near Ground Zero, including St. Paul's Chapel, which sustained almost no damage on 9/11 and served in the weeks and months after the terrorist attacks as a center of respite for people working at the site.
So I hope what happens in Lower Manhattan is that a variety of faith communities come together to welcome the new mosque and to create working relationships among those various communities -- relationships that might be deeper than whatever exists there today.
This is a chance for America to show the world how people with strong commitments to different religions can learn to live and work together in harmony. Are we up to the task? I hope so. Among other things, it might reduce the kind of anti-Islamic hatred evidence by a church in Florida that is planning an "International Burn a Qur'an Day" on 9/11 as a way of saying that "Islam is of the devil." The Simon Wiesenthal Center has, appropriately, condemned this ridiculous and shameful event.
(The map here today carries a Google copyright. I found it at http://indyposted.com/wp-content/uploads/2010/07/Mosque-Near-Ground-Zero1.jpg.)
* * *
BUT WHAT ABOUT FAITH?
People have long debated what science and religion have to say to one another. But in this intriguing piece, a man who teaches philosophy at Notre Dame raises an equally difficult question: What do philosophy and religion have to say to one another? These are the kinds of questions that never occur to people living unexamined lives. How sad.