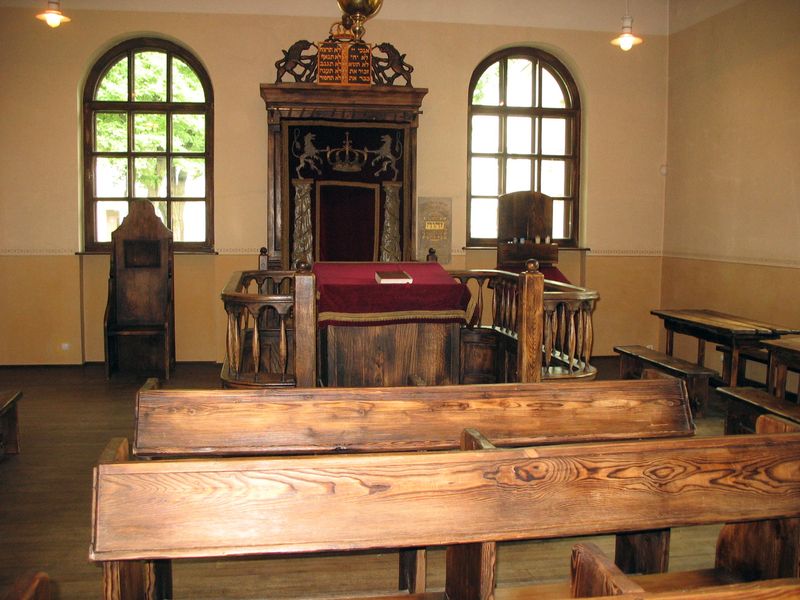 As you may know -- especially if you've read my latest book, They Were Just People: Stories of Rescue in Poland During the Holocaust -- Hitler's death machine murdered more than 90 percent of the nearly 3.5 million Jews living in Poland at the start of World War II.

Jewish life in Poland went back hundreds of years, but the Holocaust killed nearly all of it. Today, the number of Jews in Poland is numbered somewhere around 20,000, depending on who's counting. But there is, despite such appallingly low numbers, a resurgence of Jewish life and culture there, though much of it (restaurants, festivals, etc.) is produced by and for non-Jews, as my co-author, Rabbi Jacques Cukierkorn, and I discovered when we went to Poland to do interviews for our book.

(The photo here today is one I took at a restored synagoge in Oswiecim, where the Auschwitz-Birkenau death camp is located.)

But as Poland's rich Jewish heritage is being rediscovered, we are being treated to various artistic offerings that highlight it.

One of them will be presented in a special movie theater event at 7 p.m. on Tuesday, Sept. 21. It's called, "100 Voices: A Journey Home." It's a documentary about the history of Jewish culture in Poland. The film will be preceded by a mini-concert with cantors from the documentary and will feature 20th Century contemporary American music.

The link I gave you in the previous paragraph will connect you to a page about the show. There you also will find a link to give you the names and locations of theaters where the production can be seen. There are quite a few such theaters on both sides of the state line in the Kansas City metro area as well as theaters around the country for those of you outside of KC.

I hope the documentary eventually will be available in other venues because I'm committed to giving a speech at that hour that evening. If you hear that "100 Voices" is available on, say, DVD, please let me know.

As Pope Benedict XVI's visit to the United Kingdom approaches, Catholics in Britain are feeling sort of alone and under pressure, this report says. Well, in some ways that may work to the advantage of both the pope and the church. The church, after all, often does best when it is persecuted. No one ever asks for persecution so the church may grow, but often growth is what happens in troubled times.