To coincide with this weekend's anniversary (Aug. 28, 1963) of Martin Luther King Jr.'s famous "I Have a Dream" speech in Washington, D.C., Fortress Press is bringing out an important new book about King's prayer life. 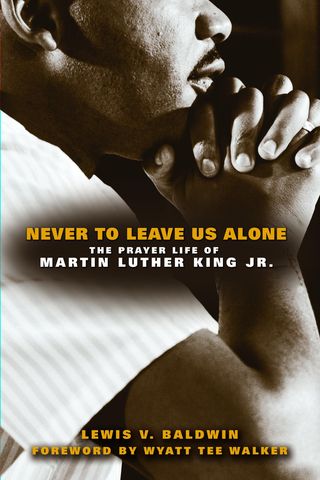 Never to Leave Us Alone: The Prayer Life of Martin Luther King Jr., by King biographer Lewis W. Baldwin, will be published this coming Wednesday. It helps us understand the powerful role prayer played in shaping King as a spiritual leader. Baldwin had spent several years putting together a collection of King's prayers but, in the end, officials at the King Estate refused to grant the necessary permissions to use those in a book he had planned.

So he went in another direction, a book in which he describes in much needed detail how and why prayer was so vital and life-forming in King's ministry and in his leadership in the civil rights movement.

Baldwin explains the purpose of the book (and of prayer in King's life) well in his preface:

"The ways in which King engaged in prayer and praying as creative energy may be the most distinctive angle developed in this work. In King’s case, prayer, voiced and unvoiced, became a call to mission or to action. He was convinced that prayer worked as an empowering and liberating force in the context of struggle. He had little patience with those who turned to prayer as a substitute for human initiative or who prayed while ignoring the social maladies that afflict society."

There is a tendency today when thinking about King, four-plus decades after his assassination, to remove him from his religious base -- a fatal mistake in trying to understand the man former President Jimmy Carter said freed not just black people but also many white people. If you don't understand King's religious roots, his beliefs and practices within his black church Christian tradition, you simply don't understand King.

This long-needed book helps us restore some of the richness of sources that produced King. Let's all hope that eventually the King Estate will grant Baldwin permission to publish the collection of King's prayers as a companion piece to this impressive new work.

LET'S ALL TAKE THIS PLEDGE

OK, people, repeat after me: If God tells me to kill someone I will not listen. I will not do it. Never. Ever. Under any circumstances. A woman in Texas shot someone after getting some kind of sign from God, she said. Look, if God wants you as a hired gun, I'm thinking this may not be the God you want to worship. And if the real God really does want someone dead and tells you to do it, say no and ask for forgiveness later. I'll bet my own life that you will be forgiven.

The Notre Dame Book of Prayer, edited by Heidi Schlumpf. On a weekend when I'm writing about prayer, it seems appropriate to tell you about this book, to be released in a few days. The University of Notre Dame is, for sure, Catholic, but in many ways it seems to belong to the nation. Similarly, the collection of prayers in this book will be of interest to any Christian, not just Catholics. But because it invokes various locations on the Notre Dame campus, it will be of special interest to Notre Dame graduates, who seem to be everywhere. The book is a joint offering by the Notre Dame Campus Ministry and Ave Maria Press. It includes a forward by the president emeritus of Notre Dame, Theodore M. Hesburgh. It's hard to imagine a circumstance for which this book doesn't include a prayer. Oh, and in the book you'll also learn this wisdom from the great pitcher Satchel Paige: "Don't pray when it rains if you don't pray when the sun shines." Satchel, whose 1982 funeral I covered as a reporter, is buried near where I live. Maybe I'll wander over the recite a few of these prayers at his grave.