Perhaps you've heard the old joke about the wife who complained about her husband this way to a good friend: "We have religiously mixed marriage. I'm an Episcopalian and he's Satan." 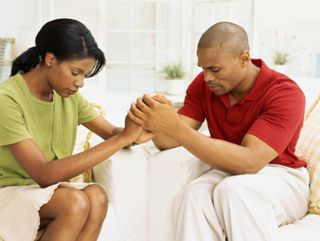 Over the years, there have been lots of studies about how people of different religions or no religion do when married to one another. The most recent study along these lines comes from the University of Virginia and looks at how shared religious activity, such as praying, affects marriages across various racial and ethnic groups.

The study suggests that couple that pray together not only stay together but also are happier in their marriages than couples who are religiously divided.

Not only that, but because African-American couples tend to be more religiously engaged than couples of other racial background, it seems to help them considerably in their marriages.

"Without prayer, black couples would be doing significantly worse than white couples. This study shows that religion narrows the racial divide in relationship quality in America," said W. Bradford Wilcox, a sociology professor and director of the National Marriage Project at the University of Virginia. "The vitality of African-Americans' religious lives gives them an advantage over other Americans when it comes to relationships. This advantage puts them on par with other couples."

It strikes me that the results of this kind of study would be terribly difficult to prove scientifically, though I'm guessing there's validity in the conclusions. There are plenty of examples of long-married couples in my own church who root their lives in faith and the practices of faith. But how do you tell whether that's what makes the difference or something else? Besides, as I indicated in this recent blog posting, prayer studies make me nervous and skeptical.

Just a week ago here on the blog I wrote about the oppression of Coptic Christians in Egypt. Today, along those same lines, I want to tell you that the Coptic pope is telling followers not to confess their sins over the telephone because often those phones are bugged by authorities. Now there's a man who understands the police state nature of Egypt under Hosni Mubarak.