What with all the religious controversies in the world, we've been way too serious here for too long, so today we take a bit of a humor break. Well, it'll be a humor break if you think any of these jokes is funny. And if you don't think so, just remember that I didn't write them. 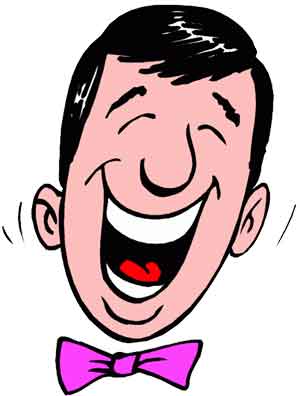 1. One day, Adam sat outside the Garden of Eden shortly after eating the apple, and wondered about men and women. So looking up to the heavens he said, "Excuse me God, can I ask you a few questions?"
God replied, "Go on Adam but be quick. I have a world to create."

So Adam says, "When you created Eve, why did you make her body so curved and tender unlike mine?"

"I did that, Adam, so that you could love her."

"Oh, well then, why did you give her long, shiny, beautiful hair, and not me?"

"I did that Adam so that you could love her."

"Oh, well then, why did you make her so stupid? Certainly not so that I could love her?"

"Well, Adam no. I did that so that she could love you."

2. A blind man is sitting on a park bench. A rabbi sits down next to him. The rabbi is chomping on a piece of matzah. Taking pity on the blind man, he breaks off a piece and gives it to the blind man.

Several minutes later, the blind man turns taps the rabbi on the shoulder and asks, "Who wrote this junk?"

3. The preacher was wired for sound with a lapel mike, and as he preached, he moved briskly about the platform, jerking the mike cord as he went.

Then he moved to one side, getting wound up in the cord and nearly tripping before jerking it again. After several circles and jerks, a little girl in the third pew leaned toward her mother and whispered, "If he gets loose, will he hurt us?"

4. Two pastors were discussing the decline in morals in the modern world.

"I didn't sleep with my wife before I was married," said one clergyman self-righteously, "Did you?"

PRESSURE ON RELIGIOUS MINORITIES IN INDONESIA

As Americans debate the question of whether a proposed mosque/community center should be located near Ground Zero in New York, the issue of religious freedom is getting a renewed hearing in the U.S. That same issue has taken on a more desperate tone in Indonesia, where extremist Muslims have been attacking Christians. Those Christians and other religious minorities there are fighting back, and it's impossible to know yet where all this will end. My hope is that the Indonesian government will step up to the plate and that Muslim leaders around the world will condemn such violent intolerance. Speaking of Cordoba House, the name to be used for the New York City facility, this interesting piece talks about why the name Cordoba and the history it does -- or does not -- reflect.