Ever since I discovered the scholarly work on the Apostle Paul by Mark D. Nanos several years ago I have been fascinated by the many ways in which both Christians and Jews have misunderstood Paul. 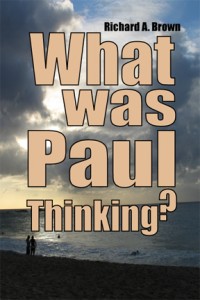 Nanos, who teaches at Rockhurst University in Kansas City, has helped me grasp the reality that Paul always considered himself a Torah-observant Jew; that he did not start the Christian religion; that he did not abandon Judaism; that his writings and ministry were aimed at gentiles, not Jews; that his words should not be used (as they often have been) as a warrant for antisemitism; that getting Paul right can have important implications for better Jewish-Christian relations.

Nanos and such other scholars and theologians as Krister Stendahl, Lloyd Gaston, E.P. Sanders and John Gager have sought to move what began to be called the "New Perspective on Paul" onto the radar screen of people in churches and synagogues. It still is a struggle and many of the bogus old views (e.g.: Paul converted to Christianity and denigrated Judaism) about Paul remain standard truth for many people.

But now there's a new short book out that might get the Paul conversation started among lay people. It's Richard A. Brown's What Was Paul Thinking?

It's only 123 pages long but it raises the main points about Paul that need to be discussed and does so in a way that is easy to follow.

One thing I found especially interesting about this book is that the author is a member of the Community of Christ, which used to be known as the Reorganized Church of Latter-day Saints, the smaller branch of the Mormons. But as far as I could tell nothing in Brown's book is in any way different from the way a scholar who came from one of the traditional Christian branches (Catholic, Protestant, Orthodox) might have written it.

Brown had the good fortune to be exposed to this new look at Paul some 30 years ago when he was a student of Gaston's at Vancouver School of Theology. Brown's interest in it has remained through his career as editor with the Community of Christ's publishing house.

If we misread Paul, our understanding of Christianity gets confused in many ways. That's what the New Perspective scholars and those who have followed them have been trying to tell us. Brown's book reinforces that message and makes it accessible to people in the pews.

Ground zero for the Holocaust was Poland, for it was there that Hitler's German government elected to put its six major death camps, including Auschwitz-Birkenau. Poles often get blamed for what the Nazi-led Germans did to Jews in Poland -- to say nothing of what the Germans did to Poles, too. And even 65 years after the end of the war Poland continues to struggle to find its place in the world. That's partly why this past weekend's presidential election in Poland was worth following, as citizens there elected Bronislaw Komorowski over Jaroslaw Kaczynski, whose twin brother, the late President Lech Kaczynski, was killed in a plane crash in April. I wish Poland well in this period of transition, but it's unclear whether the European Union itself can weather the various economic, social and political storms swirling through Europe these days. When I was in Poland in 2007 to do interviews for my new book, They Were Just People: Stories of Rescue in Poland During the Holocaust, I found myself growing quite fond of the country and its people, so I've been following developments there more closely than I might be otherwise.