When I think about great composers of sacred music other names come to mind before I get to Franz Liszt (depicted here). 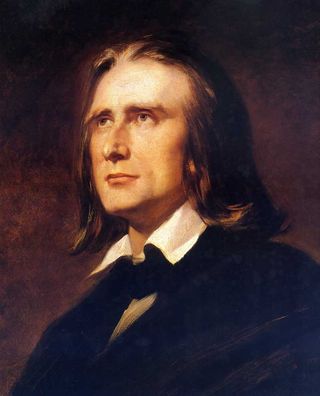 And yet this 19th Century Hungarian composer and pianist produced three large-scale settings of the Mass, two oratorios and many other works of sacred music.

And this weekend is a good time to be remembering Liszt, because he died on July 31, 1886. Indeed, he nearly died years earlier because of his adoption of some radical ascetic practices, but he survived into his 70s and produced more than 1,200 works and, in many ways, set piano music on a higher plane than it ever had been before.

There is a tendency today to dismiss Liszt, Beethoven, Mozart, Bach and so many others as old dead white guys who have precious little to say to our postmodern world. And that's too bad. Oh, for sure we need music that speaks to our particular time and that represents our culture in ways that 19th Century European classical music does not and cannot.

But that doesn't mean that Liszt and others have lost their ability to communicate eternal truths to us through their music, especially music written for religious purposes or with religious themes.

I'm not sure I'd recommend this procedure to others, but a clerk being held up at a store in Florida decided not to give the robber the money but, instead, tell him God had a different and better path for him. And it worked.