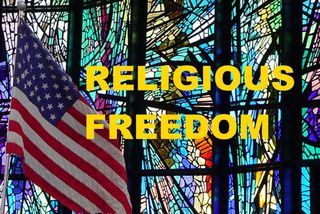 The implication is that the latter phrase means much less than the former and that we all should worry about this linguistic sleight-of-hand.

Well, it's an interesting point but one I'm not going to lose a great deal of sleep over yet. What will matter more than this noticed change of language will be a change of actions to downplay religious freedom. I'm not quite sure how that might occur but it will be worth watching to see if it does and worth complaining about if it does happen.

I do know that since it was formed under Clinton's administration, the USCIRF (U.S. Commission on International Religious Freedom), mentioned in the piece to which I've linked you above, has done some excellent work but has been essentially ignored by the State Department (which seems to get the willies when thinking about pushing a religious freedom agenda with other nations) as well as by the Clinton, Bush and now Obama administrations.

But, in the end, the president and secretary of State are not the final arbiters of religious freedom in this country. So although we need to pay attention to how and whether they stand up for it, what's more important is how it's being taught to our children and whether the courts are protecting it.

I personally wish Obama, Clinton and others representing our government would speak about "religious freedom" and not just "freedom of worship" because I believe that the former term really does point to the reality that one's commitment to a religion affects all of one's life -- at least in theory -- and not just when and how one worships.

But for now let's monitor things to see if there's really any cause for alarm.

The Swiss Guard at the Vatican -- a group of snappy dressers -- is cracking down on immodest clothing worn by tourists. Though I'm always surprised by people I see out in public who obviously either don't own a mirror or know what it's for, I do wonder whether the Jesus we see on many a crucifix would meet the Guard's new standard.

Through Fire and Water: An Overview of Mennonite History, by Harry Loewen and Steven M. Nolt. The Anabaptist tradition -- a radical reforming movement -- dates itself to 1525, soon after Martin Luther posted his 95 theses on a cathedral door and, without exactly meaning to, kicked off the Protestant Reformation. The Anabaptists weren't happy with several aspects of the Reformation, but primarily insisted that infant baptism was wrong. Rather, baptism should not happen until a person was old enough to make that choice. Today there are Anabaptists all over the world -- mostly Mennonites and the Amish, and their commitment to being peacemakers and to standing for justice today is much better known than their aversion to infant baptism. This book is a revised edition of one that first was published in 1996. It has been updated in various ways and offers a highly readable, non-academic account of Mennonite history, though set in the broader context of Christian history. It says it's written primarily for Anabaptists, but it's really a helpful read for anyone who wants to understand this vibrant branch of the Christian family.