Well, look. Let me tell you up front that I'm a harsh critic of movies. Always have been because I find that so many of them are a waste of time. At the end of many of them my only accomplishment is being two hours closer to my death. 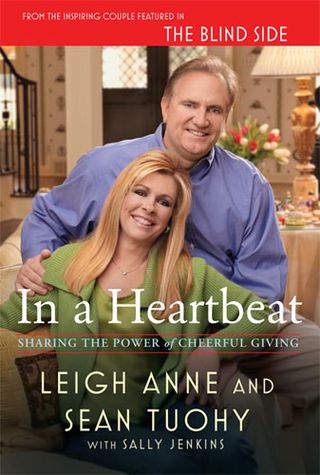 So when friends half-dragged me off to "The Blind Side" last New Year's Eve, I had few hopes of anything worthwhile. And yet I was intrigued by this film about a rich white couple taking a poor black kid into their family -- a kid who turned out to be a star NFL football player, Michael Oher. It was a flick that engaged the heart and that challenged viewers to think about generosity.

Still, when I got a review copy of a book by Leigh Anne and Sean Tuohy (with writing help from Sally Jenkins), the couple in the movie played by Sandra Bullock and Tim McGraw, I figured it would be just an amateurish attempt to capitalize on the fame obtained through the movie.

But, in fact, In a Heartbeat: Sharing the Power of Cheerful Giving is not only a fun read, it's one that reveals a couple motivated by faith and by their own histories of dealing with the traumas that life throws at people -- the early death of a parent, the aftermath of the assassination of Martin Luther King Jr. in Memphis, poverty and on and on.

If it's true that there are no normal families (an assertion my unnormal family and I will defend), then the Tuohy family fits right in, as did the families from which each of them came. And what those families produced were two people who have figured out what it means to follow the biblical rule to be cheerful givers.

You will end up caring about Sean because of what he went through as the son of a great high school basketball coach who suffered a stroke in his early 40s and died a few years later. And you will wind up caring about Leigh Anne because of the turmoil in her life when racist Memphis, where she lived, reacted to a school desegregation order by creating dozens of private white-flight schools, one of which she attended.

And you will care about both of them because of what they have to teach all of us about giving -- not major gifts of money to cure cancer but, rather, small gifts to individuals in ways that change lives.

I didn't like this book in a heartbeat. It took me three or four pages. I'm thinking you'll have a similar experience with it.

Over the years I've been an admirer of Rich Cizik, once the chief Washington lobbyist for the National Association of Evangelicals. He's always seemed to be a reasonable and wise man to me. After appearing on NPR's show "Fresh Air" in late 2008, he was dismissed from that job because of several things he said. Cizik was back on the show yesterday and seemed to be his same old self. The branch of American Christianity that calls itself evangelical would do well to give people like Cizik a fair hearing.