For a long time now -- but especially since the 19th Century -- a debate has raged about how much of the Bible is accurate history and how much is, instead, truth-filled story telling. 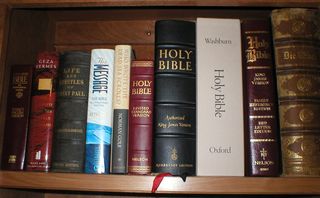 In many ways -- but not in all ways -- it doesn't matter all that much. I know there are people of faith who would disagree with me and even be outraged by what I just said. But what I mean is that the Bible is full of life-transforming truths even if some of the stories it contains either can't be verified by the standards of 21st Century historians or they never happened at all.

So I was intrigued that someone sent me this 2001 Los Angeles Times piece recently as if it were brand new and maybe even shocking. In it, scholars are quoted as saying they have grave doubts about whether the Exodus ever happened, about whether Moses, if he was real at all, ever spent 40 years wandering in the sand and so forth.

Well, whether Judaism is dependent on the literal historical truth of those stories may be up for debate, though Christianity really is dependent on whether Jesus ever lived. If he's a fictional character made up by the writers of the New Testament, then the whole faith falls apart because the faith is rooted not so much in the message of Jesus as in his person and, more specifically, in his resurrection as an article of faith.

Even the Apostle Paul writes that if Jesus was not resurrected then the faith of Jesus' followers is in vain. (And, yes, it's true that the actual resurrection event, as scholar Luke Timothy Johnson points out, is not one that can be verified by the standards of modern historians.)

And yet other parts of both the Hebrew Scriptures and the New Testament carry truth whether or not they are history. I need not, for instance, imagine that Job was a real live human being to understand the message of the book of Job, that suffering is not necessarily a sign of having sinned. And I certainly need not believe that Jonah was a literal figure of history who was swallowed by a literal whale to understand that the book of Job wants readers to grasp the high stakes involved in following -- or refusing to follow -- God.

When I help to lead Bible studies, I urge readers not to worry so intently about whether the story being told ever really happened (though I believe many of the stories did) but, rather, to pay attention to what the story is trying to tell us about God and about our relationship with God. That's what the Bible is all about instead of it being a facts-and-figures history book.

ANOTHER STUPID ATTACK ON ISLAM

The lieutenant governor of Tennessee says Islam may not be a religion so much as "a cult." Good lord. Where do these know-nothing people get this nonsense? Yes, it's true that the term "cult" once meant simply a religious group, but that's no longer what it means to most people. It means, rather, a closed, radical religious group whose members often are led around by the nose by a charismatic leader. Islam, which has more followers in the world than any religion except Christianity, has been around nearly 1,400 years. It's fine to have differences with it (as a Christian, I surely do) and it's fine to ask serious questions about the source of violent extremists who have emerged from it. But it's not fine to dismiss it as something other than a religion. This is not the kind of political leadership we need when we're trying to figure out how to live in religious harmony at a time when our religious landscape is changing.

P.S.: What promises to be an informative seminar on immigration issues will take place this Saturday at Grandview Park Presbyterian Church in Kansas City, Kansas. For all the details you need to attend, click here.