As I mentioned here a few weeks ago, a Kansas City area pastor, the Rev. Landon Whitsitt (pictured here), has been installed as vice-moderator of the General Assembly of the Presbyterian Church (USA). It's the second-highest office in our denomination. He'll be serving with the new moderator, Elder Cynthia Bolbach. 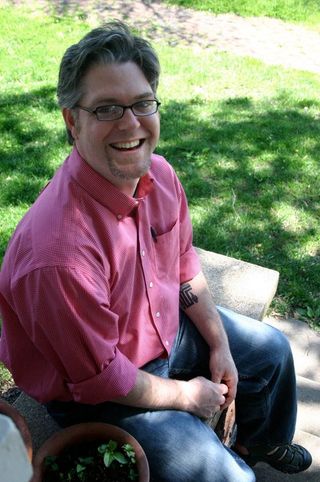 Landon, pastor of First Presbyterian Church of suburban Liberty, Mo., is a great example of young pastors in our branch of Christianity who understand what it means to do ministry in this post-modern age.

I asked Landon to respond to some questions about his new role and about the future of the church. Here's our e-mail conversation:

* How does someone who takes such a national office balance local pastoral duties with national duties, especially the travel?

"One of the particular gifts of being Presbyterian is that those of us who are pastors are not 'in charge' of the church, nor are we called to 'do the ministry' of the church. In the Presbyterian Church (as you know) it's the Elders who have the call from God to make sure the business of the church gets done, but not even they are supposed to do it. Rather, they are to equip the individual members to do it. We have been talking a lot about this at FPC (First Presbyterian Church of Liberty) for the last 2+ years, and when this opportunity came up the Elders seemed to be the most excited that they now got a very real chance to jump in with both feet and do the kinds of things we've been reaching for.

"The GA (General Assembly) will pay for pulpit supply (guest preachers), but the 'real work of ministry' is already being grasped by the Elders and membership. Even before the election, I've noticed an ownership from the Session (the board of ruling elders) that I'd not seen in my previous 3 years there. It's exciting to watch.

"Just last night, the Session communicated that they thought a lot of our Christian Ed needed to be moved online. Wow! That's something I can still do, even from the road."

* What are the moderator's and your primary goals for your term?

"Cindy's passion for the last 4 years has been the nFOG (Tammeus note: that's Presbyterian-speak for "new form of government"), so the primary talking she will be doing for the next year will be about that. But in a larger frame of reference, it's really about finding and telling the stories of how Presbyterians are 'doing it differently.'

"The nFOG is emblematic of a larger shift in our church (I think) towards a more fluid and responsive organizational identity. It starts with a new Constitution, but it doesn't stop there.

I've been vocal of my desire to see our church 'open source' itself, but that's really just a hipster way of talking about the same thing."

* What are the most important issues facing the PCUSA and the church universal?

"Even though they are intertwined, I'll say there is one that's theological and one that's political.

Theological: As Phyllis Tickle says in The Great Emergence, the most important questions of our day is 'Where is the authority?'  'Sola Scriptura' is dead most places, and dying rapidly in others. So where do we lodge the authority of our faith? That's the real battle we see fought in the church. We're not really arguing about LGBT (Lesbian, Gay, Bisexual, Transgender) inclusion, we're arguing about how we read the Bible.

"Political: Again, it is connected to the first issue, but the political question is 'Who gets to play?' The church is faced with the questions of who gets to participate and at what level. The Roman Catholic Church just made a statement on women's ordination that caused a riot. The Presiding Bishop of the ECUSA (Episcopal Church) couldn't wear her mitre to preside over Mass in . Anglican Churches are splitting right and left over LGBT bishops. We Presbyterians talk about it every GA. People always ask: 'When are we going to settle it?' My answer is: 'When we finally let everyone in.'"

* Mainline churches have been losing members for 40 or 50 years. So what?

"It was trendy at this year's GA for people to get a picture of me and my tattoo of the PCUSA seal (pictured at left) (it's quite prominent on my left forearm). Every time people would joke about what I was going to do if the church split or died. I would be okay. For me the PCUSA (and its seal) represents a moment in time when God has gathered a group of people to live in a particular way. But it won't always be this way, and rather than being bound to the 'how' of something I'd like us to be bound to the 'why.'"

* What can the Emergent Church Movement, which has come primarily out of the evangelical branch of the church, teach the Mainline churches? On a scale of 1 to 10, how important is that movement?

"I don't know if ECM can 'teach' the Mainline anything, frankly. I have always kind of thought that the ECM is the vehicle that is dragging Evangelicalism into a form of faith similar to what the mainline churches experience.

"I'm sure they'd disagree, but, as an example, a lot of folks in the ECM are jazzed to the hilt about Walter Brueggemann right now. I'm so sick of Bureggemann after reading countless books during seminary. They love N.T. Wright. I'm not trying to be rude when I point out that those are Mainline folks.

"What the ECM challenges us on, however, is our creativity. We've gotten liturgically and politically lazy. No one wants to be a part of a bureaucratic institution anymore and no one wants to spend a hour on Sunday morning sitting through what is essentially a business meeting with some hymns. But 'emergence' in general (a la Tickle): This is nothing short of our age's Reformation.

I love Dean's work, and she's 100% right. I don't know what a person in my position can do except name the problem in as many ways and in as many places as possible. But it won't be fun if we start to believe it. Our church has lost members because we didn't give them a place to 'feel good.' At our church we say that 'Big kids take care of the little kids.' Our entire purpose for being is to serve others. That's a tough pill to swallow - especially for privileged Americans.

* Whatever else you want to tell me.

"I'm allergic to watermelon, and can cook you the best scrambled eggs you ever had.  :)"

Landon Whitsitt is the Pastor of the First Presbyterian Church in (Heartland Presbytery), husband to Jerilyn and dad of 4 boys.

A 2005 graduate of Louisville Presbyterian Theological Seminary, Landon has served in campus ministry, and as the music director for a postmodern new church development. Before entering the pastorate he served on the Session of First Presbyterian Church in , (Presbytery of Northern Kansas), and was ordained as the program director for The Center for Interfaith Relations ().

He has been active with Presbymergent, the PC(USA) Ecumenical-Interfaith Network, and has served on the PC(USA) Committee on Theological Education since 2008.

When he is not serving his congregation, Landon can be found penning his forthcoming book, , and producing the weekly podcast God Complex Radio with Carol Howard Merritt and Bruce Reyes-Chow (godcomplexradio.com).

AH FOR A SIMPLE WORLD OF BLACK, WHITE

The Russian Orthodox patriarch has nice things to say about Pope Benedict XVI but has lambasted Protestants who believe in treating gays and lesbians on an equal basis with heterosexuals and who ordain women to ministry. I was especially struck by his statement on homosexuality: “It is written in black and white that it is a sin.” For rather different view -- but one that takes the Bible seriously -- see my essay on this subject under the "Check this out" headline on the right side of this page. And if you know the patriarch's e-mail address, send the link for the essay to him, too. It's time he woke up on this.

P.S.: At 7 p.m. on Thursday, Aug. 19, you'll have a chance to hear Sister Marilyn Lacey speak at Visitation Catholic Parish in Kansas City about her work with the Sudanese people. She's founder of Mercy Beyond Borders, which works in Sudan to educate women and girls in various ways. For a pdf with more details, click on this link: Download Lacey_Fundraiser_Flyer_0710.