Most Americans never think of the Puritans until Thanksgiving rolls around, and they hear the story again of the folks in England who grew upset with the failure of reform in the Church of England -- so upset they left the place and settled in the New World. You know, the Pilgrims. 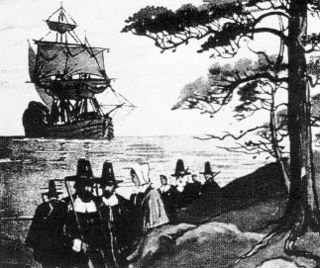 Well, we're a long way from Thanksgiving, but today is another good time to remind ourselves of these people of faith and the role they played in the formation of the U.S.

Why? Because it was on this date in 1620 that a small congregation of English Separatists left Leiden, Holland, to which they had fled, and returned to England on their way to what became the United States.

They were led by their pastor, John Robinson.

But let scholar and author Mark A. Noll tell the story from his book, A History of Christianity in the United States and Canada:

"While other Puritans were still contending in England for the thorough reform of the church and the religious life of the nation, the Plymouth settlers had largely abandoned that effort in order to carve out a separate society for themselves. Among the more extreme Protestants who were deeply disappointed when the Scottish James I, successor in 1603 to Queen Elizabeth, did not embrace the Puritan cause, were local congregations that had begun to meet together beyond the jurisdiction of the national church. One of these in Scrooby, Nottinghamshire, grew so uneasy with the course of religious events in England that it resolved to migrate to a more friendly environment. Under its pastor John Robinson, this congregation chose first to go to Holland. But in that land they were disappointed. The Dutch allowed them to worship as they pleased, but the English immigrants found the Dutch culture unappealing. . . .So after a dozen years they resolved to move much further afield to find the space they needed to worship and live as they thought best."

By Sept. 6 of 1620 they were aboard the Mayflower, heading to Virginia. But they wound up, instead, on Cape Cod. And the rest, as they say, is history. But it's history we'd do well to remember.

(I found the image of the Pilgrims at Plymouth above at http://blogs.dalton.org/vogelsang/files/2010/04/image-Pilgrims-at-Plymouth.jpg.)

GOOD REASONS FOR THAT MOSQUE

As I'm sure you know, there's been an ongoing debate about a proposal to build a mosque near Ground Zero in New York. Although I want to know more about its funding sources, I have not opposed it as a member of a 9/11 family. Indeed, I not only see no reason a mosque can't be located there, I think it would be a good thing in many ways. And so does Boston University teacher and author Stephen Prothero, who has written this good piece explaining his views. By the way, if you haven't read Prothero's book on the failure of Americans to know much about religion, please do. And if you want to read a dozen or so pieces about the mosque debate on the "On Faith" blog of the Washington Post, click here.