Here in the O.S.A., Obese States of America, many people rarely imagine the kind of hunger that plagues much of the world. 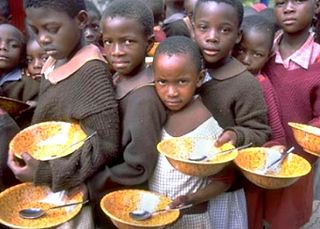 I thought this Baptist Press story might help all of us think not only about how malnourishment and killing hunger is experienced in many lands but also what those of us -- especially people of faith -- who go to bed at night well fed should do about it.

When I was a boy, as some of you know, I lived for two years in India, and saw there the hunger that my father was working to relieve through his work on a University of Illinois agriculture team that sought to teach Indians how to produce more, better and more nutritious crops.

So I'm not completely unfamiliar with what people mean when they say "world hunger." Still, it's hard to picture the kind of food deprivation that, as described in the Baptist Press piece, drove some adults to choose not to eat and to starve to death so that younger people could survive. (For Bread for the World's overview of the world hunger problem, click here.)

Religion insists that each of us has a duty to care for our neighbors, and that surely means helping to provide the basics of food, clothing and shelter. Many people of faith give their lives to doing exactly that, but the reality of hunger around the world reveals that something continues to be terribly wrong, and we are called to find ways to respond.

What will you do to help today?

A blogger for The Guardian in the U.K. makes some good points about baseless opposition in the U.S. to the construction of mosques, especially the one near Ground Zero. Is there cause to be concerned about extremists who claim to be Muslims? Absolutely. But does this mean we toss out the freedoms guaranteed by our Constitution? If so, we are terrorizing ourselves.