ESPANOLA, N.M. -- In this death-denying culture of ours, it's hard not to understand the reality of mortality when standing in front of a crematory's oven (the proper term is retort) that is using 1,675 degrees of heat to turn the body of a man to ashes. 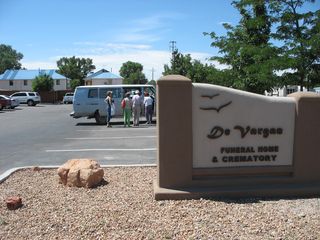 I brought my Ghost Ranch writing class to the DeVargas funeral home and crematory here the other day to give a kind of reality check about death, which is the subject about which they were spending the week writing.

The DeVargas staff was wonderful and willing to answer any and all questions as we viewed the chapel, the dressing room, the enbalming room, the "selection" room (that's where you pick out a casket), the room containing a refrigeration unit for waiting bodies and then the crematory itself.

No matter your religion (even if none), I recommend that you arrange some time to tour a funeral home. It's a way to getting you reconnected with the reality of what will happen to all of us some day, and it reminds us of the many ways in which various religions show respect for human bodies. 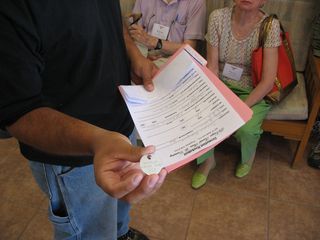 Jim Salazar, the DeVargas employee who showed us around, says he talks to families about the reality that their loved ones have moved on "to their next assignment." Then, in the special brand that constitutes funeral home humor, he suggests that for some people  the next assignment is a promotion and for some a demotion.

(In the photo on the right, a DeVargas employee shows us a stainless steel identification tag that goes through the cremation process with the body and then is included in the ashes in an urn in case there's later any natural disaster that displaces the urn from its resting place, requiring someone to identify the cremains, as they're called.)

Now Spanish lawmakers are going to debate whether to ban the full covering dress worn by some Muslim women. I don't get this. Why are laws being passed to regulate dress that is particular to a religion? Would they also ban bishops' hats? Jewish skull caps? Pastors' robes? Come on.