BLOOMINGTON, IND. -- Last fall, when Eboo Patel, founder of the Interfaith Youth Core, was in Kansas City as the keynote speaker for the annual Festival of Faiths, he said he thought it was wrong to attach the name of a religion to anyone who acts wildly outside the bounds of that religion. 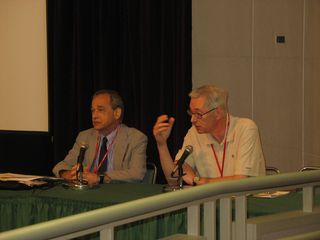 For instance, he said we should quit calling people Islamic terrorists or Jewish extremists or Christian bombers.

"The extremists of all traditions belong to one tradition, the tradition of extremism," he said.

I think there is much to be said for this approach, but I want to acknowledge that people of good will can disagree about this.

For example, the other day, as part of the National Society of Newspaper Columnists annual conference here, I was part of a two-person panel to talk about various aspects of religion and its coverage by the media.

My conversation partner was Prof. Alvin H. Rosenfeld, who heads up the Center for the Study of Contemporary Antisemitism at Indiana University. (You see both of us pictured here.)

I quoted Patel to Rosenfeld and asked him if he agrees or disagrees with him on this labeling issue.

"No, I don't agree with him whatsoever," Rosenfeld said. "I think he's trying to clean up the dirty side of religion. All religions do have dirty sides. When a doctor is murdered in an American abortion clinic in the name of Christianity, then his assassin is to be condemned specifically not just as a usual assassin but also because he's using his own religion to sanction what he has done."

Rosenfeld added that the same is true of Jews or Muslims who commit atrocities, and he offered a few examples.

"The only way we can understand so much of today's terrorism is to see it as the people who are the agents of that terrorism see it -- as a manifestation of radical Islam. It is, in fact, occurring in radical Islam. . .It is not all of Islam, but radical, politcal Islam."

Rosenfeld said that the Obama administration's approach of avoiding terms that specifically point to radical Islam "is not only phony, it's harmful because it keeps us from understanding the nature of the threat against us."

Rosenfeld did agree with me that when people claiming to act in the name of a particular faith commit atrocities, it's members of the faith cited that have the most responsibility to condemn the act.

This editorial in the St. Louis Post-Dispatch has it right. A University of Illinois teacher, whose job it was to describe Catholic doctrine to his students, should not have been let go, even if some students (and I would be included among them if I were there) disagree with what official Catholic teaching says about homosexuality. Academic freedom must mean something in this case or it means hardly anything at all.

P.S.: My latest National Catholic Reporter column is now online. It's about "holy hatred," speaking of antisemitism. To read it, click here.