OK, if, as Christianity asserts, Jesus rose from the dead on Easter Sunday, just what kind of a guy was this Jesus? 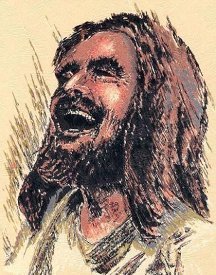 A funny one, says a Baylor University teacher.

“If we agree that Jesus was human and fully divine, he must have had a sense of humor,” says Robert Darden, author of Jesus Laughed: The Redemptive Power of Humor. “I’ve never met a human who didn’t have a sense of humor.” (Uh, well, perhaps I should introduce him to some of the people who used to read my humor column.)

Jesus being funny is not a new idea, but one that deserves new exploration. Some decades ago Elton Trueblood dug into all this in his book, The Humor of Christ, which I enjoyed reading.

One of the problems of grasping the humor of Jesus is that nothing seems very funny in King James English. Another is that what may have been funny in a Jewish culture 2,000 years ago doesn't strike many of us that way today. And yet I think Darden is right that a fully human Jesus could not have been without some sense of humor, especially given the reality that all humor ultimately comes out of pain, and pain is what Jesus saw every day of his ministry.

Baylor put together some thoughts and quotes about the humor of Christ in this press release. Perhaps it will give you some new avenues to explore. Or perhaps it will make you wish I'd used today's space to give you one of my occasional faith-based jokes posts.

(The painting here today, "Laughing Jesus," is a screen print by Ralph Kozak of an original line drawing by Willis Wheatley.)

Catholic bishops across Europe used Easter as an occasion to issue apologies for the sexual abuse scandal in the church. Well, maybe not all across Europe. There was no such word from Pope Benedict XVI. Indeed, remarks made by the dean of the College of Cardinals at the Vatican are being widely interpreted as papal defiance in the face of the scandal. I've linked to you The Guardian's report on the matter. Click here for the New York Times' report. And click here for the Wall Street Journal's report. For the pope's own Easter message, click here.

P.S.: If you've never heard Dr. Mark D. Nanos speak about his studies of the Apostle Paul, you've missed some fascinating material. But now you have a chance. He'll speak the evening of Wednesday, April 14, at Washburn University in Topeka, giving the 2010 Thomas L. King Lecture in Religious Studies. Nanos teaches at Rockhurst University in Kansas City and is the author of several books on the Pauline espistles. Much of his work challenges traditional views of Paul and seeks to identify opportunities for Jews and Christians together to acquire a new understanding of who Paul was and, thus, a better understanding of each other. The Washburn news release to which I've linked you above will tell you what you need to know to attend. And if you want a sense of Mark's work, click here for a YouTube video of a speech he made in 2008 at Villanova University.

Storylines: Your Map to Understanding the Bible, by Andy Croft and Mike Pilavachi. This is both an intriguing and odd book. Its informal tone -- almost kicky at places -- may well be attractive to young people trying to sort out how to read the Bible. And its six major themes -- from a Christian perspective -- are helpful in seeking to provide a big-picture look at the biblical narrative. But I didn't find much help here for people trying to understand how to interpret complex and at times contradictory stories. Rather, the authors simply provide a fairly literalistic retelling of the stories they choose to use. For instance, there's not much here about creation (and no index to help, either), so readers get no help with the two creation stories in Genesis and how to understand their uneasy relationship to one another. But odder still is a passage about Jesus that says this, "God looked all over the earth for one human being who would offer him perfect worship because he or she was a perfect worshipper. He could not find one until. . .Jesus." (The elliptical dots are the authors', not mine.) WHAT? This flies in the face of traditional Christian theology, which the authors seem so intent on supporting elsewhere in the book. This quote implies that the son of Mary became the son of God, not -- as orthodox Christian theology would have it -- that the son of God became the son of Mary. It's quite puzzling. Still, the book raises lots of interesting questions in a useful framework. But I hope young people who read it will do so with guidance from someone who can help them through its puzzles.