The abominable medical work carried out against the mentally and physically disabled under the auspices and direction of Hitler's Nazi regime was simply -- indeed, literally -- breathtaking. It was a precursor to the genocide we know as the Holocaust. 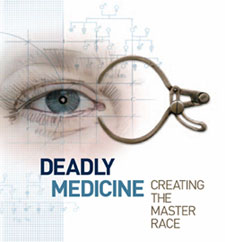 And now you can get an up-close sense of what all that was about at an upcoming exhibit in Kansas City called "Deadly Medicine: Creating the Master Race." (Scroll down a bit after you click on that link.)

The exhibit runs March 16 through June 10 at the National Archives facility at 400 West Pershing Road, near Union Station. It is being presented by the Midwest Center for Holocaust Education with help from the Archives and the Center for Practical Bioethics.

The exhibit was organized by the U.S. Holocaust Memorial Museum. To view that museum's excellent Web site about the Deadly Medicine exhibition, click here. (And be prepared to spend some time surfing around and preparing yourself to see the Kansas City exhibit.)

The most distressing part of this story to me is the way Hitler's government worked with medical professionals who, on ethical grounds, should have refused to have anything to do with the idea of creating an "Aryan master race." Yes, times were different then and there wasn't as much genetic knowledge, but providers of medical services should have known they were crossing all kinds of clear ethical boundaries. And yet they did it, sometimes gladly.

There are countless aspects of the Holocaust that must be covered in any comprehensive study of what happened and how it happened at all. My co-author, Rabbi Jacques Cukierkorn, and I feel good about being able to contribute a little bit in our new book to the story of non-Jews who helped to save Jews: They Were Just People: Stories of Rescue in Poland During the Holocaust. But there are many other pieces of the Holocaust puzzle that must come together to achieve anything like a full view.

The "Deadly Medicine" exhibit will help to fill in some of early pieces of that picture, and I hope you will make an effort to see it while it's in Kansas City. The exhibit is free and will be open from 9 a.m. to 5 p.m. Tuesdays through Saturdays. You may get more information by calling 816-268-8000. The archives facility here houses more than 50,000 cubit feet of historical records dating from 1820 onward.

In a laudable attempt to understand a wide range of religious commitment -- from staunchly faithful to unbelievers -- the Obama administration has reached out to and met Friday with a group of nonbelievers. Click here for a story written before the meeting. And for a not terribly informative story written after the meeting, click here. Interfaith, or interreligious, dialogue is not complete if people who call themselves atheists, secular humanists, agnostics, freethinkers or some similar label aren't included. I'm glad this administration knows that.