Interesting stuff has been piling up on my desk, so today I'll unload an in-basketful of items for you to ponder. And I suggest you give yourself some time to read the first longish piece if you want to get a much better understanding of the challenges facing Islam and Europe as they seek to find a way of living together in harmony. 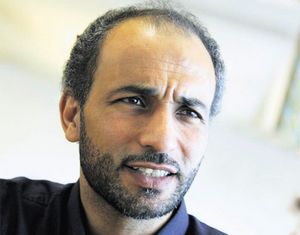 * The article is about Tariq Ramadan (pictured here), an innovative Islamic scholar whom the Bush administration elected to prevent from coming to America because of his alleged radical ties. The Obama administration has lifted that ban, and Ramadan -- “I am Swiss by nationality, Egyptian by memory, Muslim by religion, European by culture, (and) universalist by principle,” he says -- has written a new book in which he seeks to explain his beliefs. I think it will be important to try to understand the vision of Islam that Ramadan is offering (though not uncritically) because I think it points to a way forward that can make sense.

* Next, I want you to know about an intriguing new report out about how the U.S. government should take religion into account as it conducts foreign policy. The report is sponsored by the Chicago Council on Global Affairs and was written by a task force chaired by R. Scott Appleby, the John M. Regan Director of Notre Dame's Kroc Institute for International Peace Studies and professor of history, and Richard Cizik, president of the New Evangelical Partnership for the Common Good. In summary, it concludes that "the United States government will not only need to develop a far greater understanding of religion’s role in politics and society around the globe — including a detailed knowledge of religious communities, leaders, and trends—but it must move beyond traditional state-to-state relations to develop effective policies for engaging religious communities within and across nations." This looks like the kind of report that everyone in the State Department and in Congress should read carefully. Religion is a power and force in the world that is not going to disappear, and we need to know how to incorporate its reality into our global thinking.

* An annual conference on the Holocaust and Christian churches will take place early next month at St. Joseph's University in Phiadelphia. The conference is designed to teach and remember lessons of the Holocaust while examining the failure of Christianity to confront Nazi antisemitism and “the Final Solution.” The conference was founded by the late Franklin H. Littell, a pioneer in Holocaust studies. I interviewed Littell the year after the fatal Branch Davidian fire outside Waco, Texas, for his thoughts on the ways in which our government agencies then failed to respect religious freedom. He was the author of The Crucifixion of the Jews: The Failure of Christians to Understand the Jewish Experience. In my experience, many American Christians are woefully ignorant of the long history of anti-Judaism in the history of the religion and what that mean for creating an atmosphere in which the Holocaust could happen. For my longish essay on that subject, look under the "Check this out" headline on the right side of this page.

* The Huffington Post has created a new section called HuffPost Religion. To read the announcement about it, click here. See what you think.

* People in Tennessee charged with the death of their 7-year-old child have said they were just following the child-rearing advice of "No Greater Joy" ministry. If this is the parents not understanding that advice and running amok, that's one thing. If, however, the ministry is leading people into this kind of behavior, that's another, and, if the latter, I hope authorities throw the book at ministry leaders.

* I don't yet know quite what to make of this, but a prominent Jewish group again has expressed distress over something that's happening in my denomination, the Presbyterian Church (USA). The last time something like this happened -- when the church's national governing body voted to consider disinvesting from some companies that do business in Israel -- I wound up criticizing the PCUSA for the way it was handled. This time I don't yet know enough to have an informed opinion, but I wanted to alert you to the controversy. Officials from the Simon Wiesenthal Center have criticized an upcoming report from a special PCUSA committee that is looking at what positions to take in the Palestinian-Israeli conflict. The Wiesenthal center declared that adoption of a document known as the Kairos Palestine Document -- which it called "poisonous" -- "will be nothing short of a declaration of war on Israel and her supporters.” Here is an early February story from the PCUSA's news service describing the workings of this special committee and its upcoming report. For the story on all this from The Presbyterian Outlook, an independent publication that covers the PCUSA (and for which I write a monthly column), click here. Although I am withholding my opinion about all of this, I do know that it's easy to walk into the middle of this conflict and stir up bad blood needlessly. I also know that not all criticism of Israeli policy is antisemitic. And that not all sympathy for the Palestinians is clear-headed. But maybe in this case everyone is wrong. We'll see. To read the Kairos Palestine Document, click here.

Ah, yes. Let's learn our theology from beauty queens. "Miss Beverly Hills" now says the Bible hates homosexuality. If you'd prefer a reasoned, exegetical and therefore different approach to this subject, see the text of my speech on this under the "Check this out" headline on the right side of this page.

P.S.: I'll be leading two retreat seminars this year, one at Ghost Ranch in New Mexico in July and one at Kirkridge Retreat Center in Pennsylvania in early November. I'd love to have you join in. For details, click on the link to the "Where's Bill speaking?" page on the right side of this page.