In yesteday's post I mentioned getting to hear Imam Yahya Hendi (pictured here), who serves as a Muslim chaplain at Georgetown University. 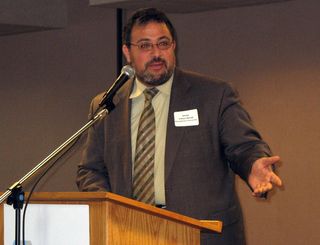 While I was at the event at which Hendi spoke, I also learned of a new organization that he's heading up as president -- one I'd like you to know about because I support its goals. It's called Clergy Beyond Borders, and its hope is to get Muslim, Christian and Jewish clergy working together in various ways.

I invite you to explore the new group's Web site to see what it's up to, but here, from that Web site, is a brief outline of the organization's mission:

"Empower religious leaders to explore and utilize the resources of their diverse religious traditions in the advancement of world peace.

As Hendi told those of us who heard him speak in Kansas City this week, his goal is not to destroy walls between people of different religious traditions but, rather, to transform those walls into tables, where people can join together for conversation and spiritual sustenance.

My hope is that some clergy from the Kansas City area will join up and support the peacemaking goals of Clergy Beyond Borders.

Various religions and religious leaders are voicing opinions about the move by airport security personnel to use body scanners. The pope is turning thumbs down on the idea and some Muslim leaders suggest adherents ask for a pat-down instead of going through the scanner. Here's one more interesting example of how the theology drawn from sacred texts can guide thinking today even if scripture written centuries and centuries ago could not possibly have anticipated needing to say something about body scanners at airports.