For Lent this year, a friend who is an Episcopal priest is leading a seminar series called "Real World Reconciliation." My wife and I came to the first session and hope to get to the others, too. 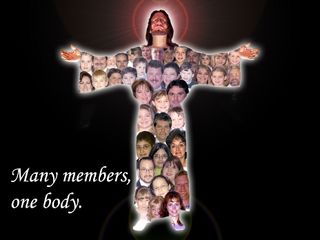 I want to share with you two notions that I've been thinking about since that first gathering this past Sunday.

One is the idea of "ubuntu theology." It's the theology adopted by South African Archbishop Desmond Tutu, and it emphasizes community over individuality. The link I've given you in this paragraph is a review of a book by Michael Battle called Reconciliation: The Ubuntu Theology of Desmond Tutu, and it will give you a pretty good sense of how this theology approaches life.

In material our priest friend handed out to people attending these session, she said that ubuntu refers to people who are affirming of others, who aren't threatened by the success of others, whose true sense of themselves comes from knowing that they belong to a greater whole and who know that they are deminished when any person is humiliated, diminished, tortured or oppressed.

As she pointed out, in the Christian tradition, this description comes very close to describing people who are members of the body of Christ, which is the church.

The idea of humans being the body of Christ on Earth is quite counter-cultural in that it places a high emphasis -- as does ubuntu -- on the well-being of the community. Yes, it values individuals for sure, but it doesn't become mindlessly individualistic as though somehow community doesn't matter.

I'd love to sit in on classes on various churches when this idea of the body of Christ versus American culture is discussed. I'm betting lots of Christians don't understand the difference. But maybe I'm wrong.

A legislator in Virginia says that when women have abortions, God punishes them by giving them later children with disabilities. Now do you see why it's so hard to write comedy? It's because it's almost impossible to be funnier and more bizarre than stuff people actually do and say.

P.S.: There's more progress to report about gays and lesbians in Christian ministry. Nearly 10 years ago a small Lutheran congregation in North Kansas City, Mo., called Donna Simon as pastor. Before long, that resulted in the regional bishop putting the congregation under censure and admonition because Donna was in a same-sex committed relationship and that was a no-no under church rules then in effect. But as of this yesterday, that censure has been removed and the church has been welcomed back into full communion with the Evangelical Lutheran Church in America -- not because Donna has changed her sexual orientation or left the post of pastor there but because the denomination has changed its stance on whether gays and lesbians can be ordained to ministry. I've written about Donna before and know that she has a wonderful pastoral heart, so I'm really pleased that her denomination is moving in what I consider to be the right direction on this.