The Roman Catholic Church is about to finish a revised version of the liturgy contained in the book the church uses for the Mass in English. 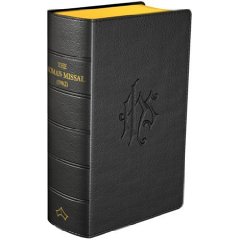 And, as might be expected when you make changes in something people are used to, it is causing some consternation amidst the hope.

The international committee of bishops created to advise the Vatican's Congregation for Divine Worship and the Sacraments on the translation of the Roman Missal into English met in Rome in late January. After you read the story to which I've linked you in the previous sentence, pay attention to some of the comments left after the story. They reflect the angst some Catholics are feeling about this upcoming English translation, which is said to be close to a literal translation of the Latin.

I wrote about all of this twice last October, and don't want to repeat all that here. So have a look here and here for those previous posts.

What I do want to do today, however, is to suggest that the pope's chief liturgist has it right when he says the church would do well to continue reforming its liturgy.

In the Reformed Tradition of Christianity, in which Presbyterians (I am one) locate themselves, there is a saying that the church is "reformed and always reforming." By that we mean that we try to be open to finding ways to offer the gospel message of the church in new ways so people will be able to hear it in understandable language. The words that may have made sense when the King James Version of the Bible was published in 1611 may seem like gibberish to someone in 2010. So the church looks for new language to deliver the old story.

The task, however, is to do that in a way that doesn't jar the listener who is used to certain language and that doesn't do violence to the central message. That is no easy task, as the Catholic Church is finding out even before this new English liturgy starts being used in late 2011 (the current guess).

But not to try to reform liturgical language would be a bigger mistake than getting some of its tone a little off key.

Pope Benedict XVI also wants to reform the way people view the church. He told Scottish bishops this week that the Catholic faith must not be perceived as a series of prohibitions, of no, no, no. Rather, he said, the church must be understood to be preaching "God’s infinite, transforming and ennobling love for all of us." A good question for leaders of any faith community is when the prohibitions start to overwhelm the message of grace. I suspect it happens a lot, especially with children.