Today I'm going to jump back into the God-hates-Haiti controversy to talk about why a common phrase that many people use reflects bad theology -- at least what I believe to be bad Christian theology. 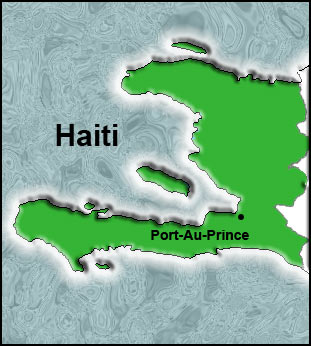 Most of the attention on the God and Haiti controversy has focused on the ridiculous allegation from the Rev. Pat Robertson that God punished Haiti with the earthquake because of a pact with the devil Haitians made some 200 years ago.

But even President Obama dredged up similar theology in one of his first remarks about the situation in the beleaguered country. Here is what he said on Jan. 14:

How many times have you heard people say that last phrase, "There but for the grace of God go we"? I hear it a lot, and I know it is meant to be a statement of sympathy and even empathy.

But it's not all that different from Robertson's contention that God is punishing Haiti.

What Obama was really saying there, whether he meant to or not, is that God chose to spare us from natural disaster but chose not to spare Haiti. Instead, even in Obama's formulation, God chose (echoes of Robertson) to punish Haiti.

This envisions a God who uses natural disasters as punishment for sin. Like the 2004 tsunami in the Indian Ocean. Like Hurricane Katrina. Like the wind storm a few years ago that toppled some electricity lines on my property. My bad.

As I've said before, this is not the God that I as a Christian have come to know most fully in Jesus Christ. This, rather, is a vindictive, bully God who intervenes, if at all, not with compassion and care but with wrath. I'm in no way suggesting that humanity doesn't anger God. The biblical witness is pretty clear about that. But if we take literally all the wrath-of-God destruction stories in the Bible, I think we misunderstand the purpose of those stories and I think we wind up with a God none of us could love because such a God would not be loving us.

So I hope we'll be careful about how we toss God's name into our conversations, even when our intent is good (as was Obama's). If we're not careful, the message about God that we give to others can be seriously warped and harmful.

There's a fascinating mix of personal faith and international crisis in Henry Paulson's new book about how he helped to manage the financial crisis as treasury secretary at the end of the Bush administration, and this account captures it pretty well. But I was struck oddly by the writer's description of what he calls Paulson"s (and George W. Bush's) "faith in religion." Well, no. That's not what people of faith would say they have faith in. Rather, their faith is in God. Religion is simply a way of being able to articulate that faith in some coherent way.

P.S.: From 7 to 9 p.m. on Thursday, Feb. 18, I'll be teaching a Communiversity class on essay writing at in the Witherspoon Room of Second Presbyterian Church, 55th and Oak. For the Communiversity catalog entry about the class, click here and then scroll down to page 14. For more places I'll be speaking or teaching, look under the "Check this out" headline on the right side of this page for the list of speaking engagements.